#sunday night football
BroBible may earn a commission if you buy a product or service via links in this article.
by Dallas JacksonNovember 5, 2022 5:52 pm 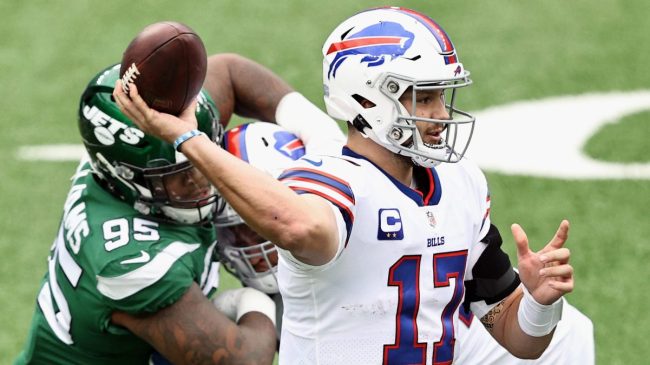 The best thing about this offer for Bills versus Jets is that this is a moneyline offer and everything I say about the game will remain true no matter what day of the week you read it. Baring something  absolutely catastrophic happening to Buffalo, I am telling you to to stop reading and click the offer link.

Buffalo is one of — if not the best team — in the NFL. It was an obvious preseason Super Bowl pick to come from the AFC. Nothing about its play has done anything to change that perception. And even as the offensive firepower gets the headlines, it is the defense that has been the true strength of the team.

Entering the week, Buffalo is allowing the third fewest yards per game in the league. The Bills are also giving up the fewest points per game. The defense is playing old-school football by being relentless on the line, aggressively cleaning up with its linebackers, and keeping the ball in front of the secondary. It forces the teams to play shorter than it may otherwise want and has disrupted each offense is has faced. The run defense could be more sure and that may hurt it come playoff time, but we are not there yet.

Allen has just under 2,200 passing yards through seven games. He has 19 touchdowns and has thrown for at least two in every game this season. If the Bills continue to win, and lock in the No. 1 seed, he is most likely going to take home his first MVP award.

On the other side of the field will be the Jets. The team is in a position to maybe score a “trap game” stunner with Buffalo having Minnesota next. A punchers chance is about all New York has going for it. Which is to say, it is not the place to bet your money when you really just want to make sure you get the free $200.

New York is a below average team and so if you are beating them, you are at least average. If they are beating you, look for a Top 10 draft pick. Before anyone says one word about the Jets beating the Dolphins, please remember that Tua was out for the game. And that Teddy Bridgewater was knocked out of the game after one passing attempt. The Jets scored the final 21-points in the fourth quarter to turn a 19-17 game — against a third string quarterback — into its “signature win”. With all of that going in its favor… not impressed.

The Jets are the perfect barometer for average.

Take the Bills because they are the better team and get $200 back when they win! (That’s $200 in addition to your winnings) Do it before DraftKings realizes how much money it is going to be giving away.