#Football
BroBible may earn a commission if you buy a product or service via links in this article.
by Dallas JacksonNovember 14, 2022 2:22 pm 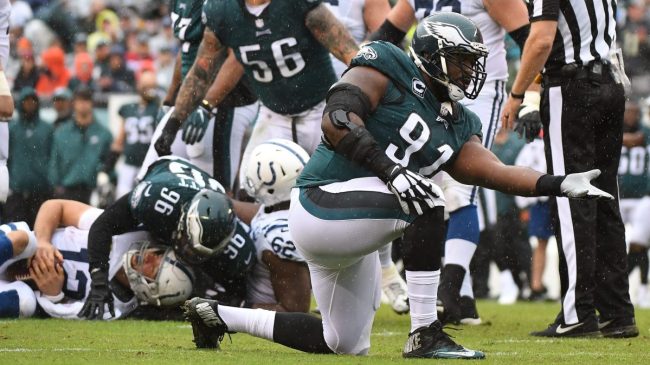 Let’s talk about it, Eagles fan. I, like you, knew the Eagles were not going undefeated this year. I figured that there would be a trap game somewhere in there that would trip the team up. And, if we are being honest still, I thought it was going to be this week against Indianapolis.

I figured the Colts had the right mix of moxey, talent, and would have been flying under the radar. I did not think it would be that loss to Washington. I, like you, saw it as a division game… on Monday Night Football… against a vastly inferior opponent. No chance that was going to be the trap game. Until it was. Damn.

Okay, time to rebound and refocus.

Or, as the Eagle players said, ‘wake up’ in time for Indianapolis.

Clear it all out: Jalen Hurt had his worst game. By extension, A.J. Brown did too. The rest of the offense never really got in gear at any point. Miles Sanders had just 54 yards on 12 carries. Defensively, Darius Slay was dusted multiple times by the only real threat for Washington, Terry McLaurin. There were three sacks there was also a lot of time to pass. The Commanders didn’t have a single player average more than 3.3 yards per carry, but the team pounded the Eagles front with nearly 50 rushes. Washington milked time of possession with over 40 minutes to just 19:36 for the Eagles.

Now, against the Colts, the Eagles appear to be the better team, but its lone weakness — run defense — is something the Colts might be able to exploit in the same manner as Washington did. The concerning part of that theory is that despite having Jonathan Taylor, the offensive line for Indianapolis has limited the team to the 25th ranked rush offense in the NFL.

The novelty act of Jeff Saturday coaching will also wear off. The Raiders are trash. Philadelphia is a much different animal.

This would have been a spot to look for value and hope for a trap game — and at nearly +450 (opening line) — it could be there if you believe in the Colts. But since the trap already got us, it doesn’t feel like the right spot to go to the window with anything other than Philly here, especially when you have to pick the winner to pick up the extra money.

You don’t care about the line, but you want to get $150 back if the team you bet on wins! (That’s $150 in addition to your other winnings)