DraftKings: Bet $5 On Giants vs Seahawks & Get $200 If You Pick The Winner

#NFL
BroBible may earn a commission if you buy a product or service via links in this article.
by Dallas JacksonOctober 26, 2022 9:58 am 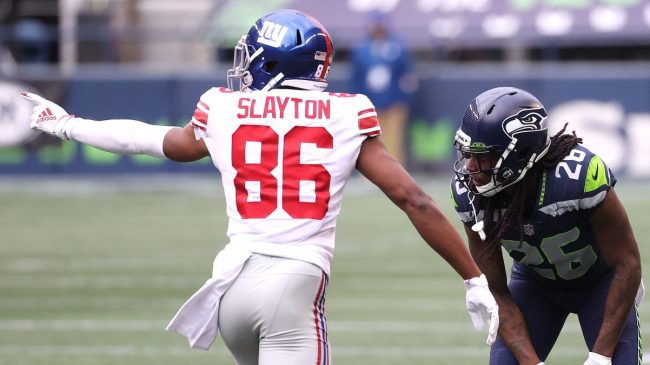 I have been tasked with capping two Giants games this season for BroBible and both times I took them. I’d like to think I was ahead of the curve. I detailed exactly how the Giants would beat Chicago. I was pretty stunned I got to write about them as an underdog again. And against the Jags, that was an easy win. (Okay, no Giant win has been easy.)

Now the Giants head west to one of the most difficult places to play: Seattle. Despite being 6-1, the team is an underdog… again. Yes, the fourth straight week the Giants are dogs. That is great news for you because you are picking the winner and getting value.

Daniel Jones has suddenly become a very capable quarterback. He led his fifth game-winning drive of the season last week against Jacksonville. It is almost like he has gotten a lot better once his head coach became the guy who coached Josh Allen and made him better.

Brian Daboll and his staff have made a world of difference.

The former offensive coordinator in Buffalo has turned the Giants into a serviceable offensive unit in short order. It helps that Saquon Barkley has returned to form — and leads the league in rushing. It is amazing that the wide receiver room has been able to get open let alone thrive in recent weeks. A patchwork offensive line is more banged up after last week. Both left guard Ben Bredson and rookie right tackle Evan Neal both went down with injury. Both will miss this game.

Their replacements each got nearly a full game of play in. Tyre Phillips played 58 of 77 snaps in the contest and was a third-round pick himself in 2020. Rookie Josh Ezeudu filled in for Bredson and played 61 snaps. Most impressively he was the pulling guard on eight straight plays that the Giants used to move the ball in the fourth quarter to set up its field goal.

The defense knows what will be coming at it.

Seattle has found its workhorse in Kenneth Walker and he will be the key to the machine this week. It would be more encouraging if the Giants were not in the bottom five in rush defense. Where this worm turns is at quarterback. Geno Smith is thriving. That is the factor that will regress to the mean. Smith is not going to win the game if the Giants commit to stopping the run.

Smith is “leading” a Top 10 offense in the NFL. It is ranked No. 9 with 24.3 points per game. Seattle just lit up the Chargers and the offense put up over 400 yards. Only 210 of that was passing. Smith is only averaging 245 yards passing per game. He is being asked to be a game manager and not lose.

Seattle also struggles at stopping the run. Like the Giants, it is a Bottom 5 team on defense. In an odd way these teams are very similar to one another. The Giants have more talent and are better coached. We love that they keep never getting respect at the books. Profit is there.