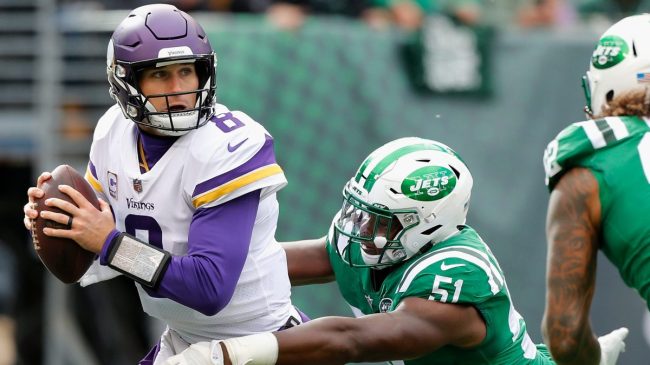 To win this offer, you have to pick the winner. The 9-2 Vikings playing at home against … the Jets??… I’m going to make my play on the Jets. If you are taking Minnesota, I understand it. Go click this link to get $150 back if Minnesota wins! I was at the game against the Patriots on Thanksgiving. The Jets are winning this game.

There is not a ton of value, as the Jets are only a small dog in this play, but the opening line of +135 is indicative of what both teams actually are. Not what their records and point totals make you believe.

Minnesota is a very good team. It can do a lot of things. The Vikings have smoked on that AFC East pack. It beat Buffalo, Miami, and New England. It will take a team built a certain way to beat them. That type of team is the New York Jets.

The Jets — on both sides of the ball — can shut down Minnesota.

New York has exactly what it takes to stop the Vikings. Sauce Gardner is probably not ready to ‘stop’ Justin Jefferson, but no one is. Gardner is good enough to keep Jefferson from being open on almost every play and make Kurt Cousins look elsewhere. Oh, DJ Reed, on the other side, can clamp on Adam Thielen. The defensive line will get pressure against a vulnerable Vikings line. So long as Dalvin Cook insists on dancing — and Minnesota insists on not playing Alexander Mattison — the running game will remain so-so. Unless Minnesota is ready to feed tight end TJ Hockenson it is going to be a frustrating day.

New York can also score on Minnesota. Many teams will be able to, mind you.

New England is my favorite team, and the Patriots kind of suck on offense. Mac Jones threw for over 300 yards in the game with nearly 80% completion. The team could have scored more. With Mike White at quarterback, the talent around him, and the health of the offensive line returning, there is a lot of promise for New York.

Let’s talk about that offensive line.

Last week right guard Nate Herbig returned after missing one game. Right tackle Max Mitchell was back after being out for six games. Duane Brown, Laken Tomlinson, and Connor McGovern were all very solid. McGovern allowed one sack, but he has been solid — and crushes on run blocking. Curiously, Cedric Ogbuehi started last week and got hurt which allowed Mitchell to play the majority of the snaps and look good. The depth there is amazing.

Mike White was what the team needed at quarterback.

New York lost two games to New England that it should not have. That is just plain and simple truth. Zach Wilson was borderline throwing the game in each of those contests. The Jets should be 9-2. They are that good.

White made quick decisions. His release time was tied with Tom Brady (you may have heard of him) for second-fastest last week. Talents like Corey Davis — who is also a blocking machine from his time in Tennessee –, as well as Garrett Wilson, Elijah Moore, and Braxton Berrios, round out a complete receiving corps that can burn a terrible Minnesota secondary.

The Jets can also sneak in plenty of attempts to tight ends CJ Uzomah and Ty Conklin. The team can mix in an actual ‘hot hand’ at running back with Michael Carter, Zo Knight, James Robinson, or Ty Johnson. Those were all backups to Breece Hall.

This is not the upset pick that outwardly it could sound like. New York is actually really good. So is Minnesota, but its flaws are much more exploitable.

Take the Jets on the moneyline to get your free $150 from DraftKings when they win!