DraftKings: Bet $5 on Lions vs Vikings & Get $150 Back If You Pick The Winner 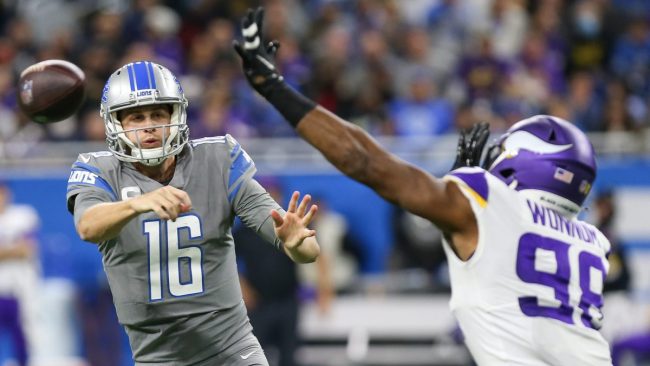 R-E-S-P-E-C-T… as of this writing, the Detroit Lions are favorites against the Minnesota Vikings. Yup, the 5-7 Lions are finally getting the respect that they deserve. And while hosting the 10-2 Vikings, no less.

I have been clamoring for more Lions love over the last several weeks. The team has been a cash printing machine since the calendar flipped into November, and I do not see it slowing. The team is good!

Detroit was leading Miami 27-17 before it let the lead fade to a 31-27 loss. I jumped on right then. Others waited. Since then, outright wins against Green Bay, Chicago, New York, and the Jags have followed. Time management kept an outright Thanksgiving upset of Buffalo from cash, too.

I know Dan Campbell gets roasted for counting his moral victories and measuring the “should be” record. Detroit should be 7-5, if not 8-4. Honestly, the moral victories would be real victories if it weren’t for some of his blunders. But I digress.

Minnesota is riding high after completing its sweep of the AFC East. The Vikings also (should) know that this is going to be a battle.

The two already played once this season, a 28-24 Vikings win. Like the collapse to Miami, Minnesota scored the final 14 points in the game against Detroit to steal the win. It was a blunder by Campbell to try and kick a 54-yard field with 1:10 remaining. The kick would have eliminated the potential for a tie but gave Minnesota great field position. It resulted in a touchdown to K.J. Osborn and a blown victory.

Minnesota is still that team. It is a team that lives in the margins. Its defenses bend — a lot. It breaks sometimes, but it does quite a good job inside the redzone. Its offense can chuck it up to any of Justin Jefferson, Adam Thielen, TJ Hockenson, or the aforementioned Osborn. Dalvin Cook dances too much but can run. I love Alexander Mattison as his backup and think he could start elsewhere, but banking on winning shootouts is a tough place to comfortably place your money.

Detroit is not still that team.

The Lions, as I have stated, is good. Detroit is also about to get healthy.

The Lions have finally welcomed back DJ Chark, Josh Reynolds, and Jameson Williams (six decoy snaps, but still) on offense. It is a formidable receiving group with Amon-Ra St. Brown and Kalif Raymond, and it showed versus Jacksonville. Williams’s health will only allow the team to pass more on the worst secondary in football.

Detroit also had Jeff Okudah and Josh Paschal back on defense after injury.

Oh, pass rusher Romeo Okwara is expected back for the game with the Vikings. Maybe guard Evan Brown could be back too.

For everyone citing the disrespect for Minnesota being the underdog here, they are ignoring that Detroit is a good football team.

It may be hard to buy the Lions without the value, but that is where this offer comes in. Take the Lions on the moneyline and get an additional $150 from DraftKings when they win!