#Football
BroBible may earn a commission if you buy a product or service via links in this article.
by Dallas JacksonNovember 14, 2022 12:17 pm 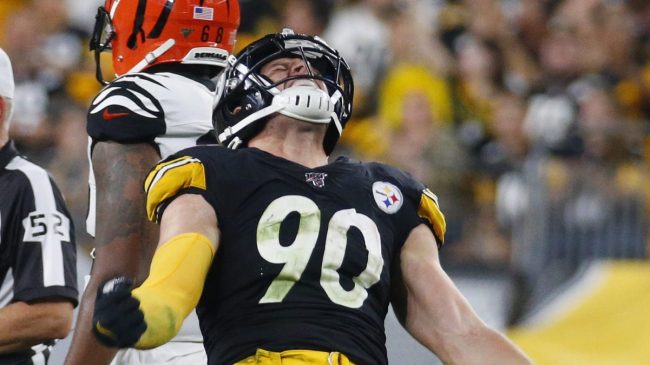 Let the disrespect flow, Yinzers. Your Pittsburgh Steelers — fresh off a win that I was betting on — are again home underdogs. Ohhhh, and the NFL ‘flexed’ what was to be Sunday Night Football into the afternoon game. So the league and TV execs do not believe in you either.

In case you wondered, new reader, the New Orleans game went exactly as I predicted. The Saints offensive line sucked. The Steelers defense played strong with T.J. Watt back. Andy Dalton struggled in Pittsburgh like he always does. And the Black & Gold did what it does under Mike Tomlin, fights and claws.

It will need all of that this week, too.

Pittsburgh stole a win in the opener as Cincinnati lost its long snapper to a biceps injury. His absence allowed an extra point to be blocked to force overtime. It was additionally problematic as a potential 29-yard, game-winning field goal was awkwardly placed and pushed wide. The insanity allowed Pittsburgh to secure a 23-20 overtime win.

It is important since this DraftKings offer only cashes if you bet the winner.

That caveat means we have to look into what we really think will happen here because it is a true bonus; not a gift.

First and foremost, this game isn’t coming down to a longsnapper. Also, fix your mind: how would you evaluate this if Cincinnati won 21-20 on a last minute score instead of losing 23-20. That is what we have to do.

The Bengals offensive line still stinks. TJ Watt is still going against La’El Collins. He had a sack, three tackles for loss, and an interception in Week 1. He also left the game early with a torn pec. Watt picked up right where he left off last week against the Saints, and it figures that he will abuse Collins some more. The defense behind Watt has played well in his absence, too. The linebacking group is among the best in the league.

The Steelers have the No. 6 run defense in the league (again, this is without Watt since Week 1) and also just shut down Alvin Kamara the way it already did to Joe Mixon earlier this year. Mixon has had one brilliant week for the season and has struggled behind a bad offensive line.

Speaking of the bad offensive line of Cincinnati.

Burrow has already been sacked 32 times, too.

He led the league last year with 50 sacks, and that was after sitting out the last week of the season. The team may or may not have Ja’Marr Chase back. That is still uncertain after a bye week. Even with Chase, it is hard to hit big plays if Burrow is on his back.

Burrow is 2-2 against Pittsburgh — in a small sample size — but he does not play well against the Steelers. His completion percentage, quarterback ranking, sacks per game, yards per game, and touchdown-interception ratio are near the bottom of his stat sheet. Familiarity does not breed success in this rivalry.

The Steelers are near healthy on defense — though they will not have Minkah Fitzpatrick. The team has also upgraded to Kenny Pickett over Mitch Trubisky at quarterback. It thinned the herd at the receiver by getting rid of Chase Claypool, leaning on the insanely talented George Pickens. The team also found versatility in the spry Jaylen Warren working in the passing game, with the suddenly invigorated Najee Harris pounding the ball.

Pittsburgh has been a home underdog 25 times since 2003. The team is 18-4-3 against the spread. It is also 16-9 outright winning. The team historically owns the Bengals.

Wanna know the secret sauce? Surprise, it is Watt. Since he joined the league in 2017, the Steelers are 53-27 with him. 1-10 without. He is their superstar quarterback. He just plays on defense.

There is nearly +200 value on the Steelers in what amounts to a must win. Get Heinz Field (#NeverAcrisureStadium) rocking and get $150 back when they win! (That’s $150 in addition to your winnings)