DraftKings: Bet $5 On The Jets versus Patriots & Get $150 If You Pick The Winner

#Football
BroBible may earn a commission if you buy a product or service via links in this article.
by Dallas JacksonNovember 14, 2022 6:26 pm 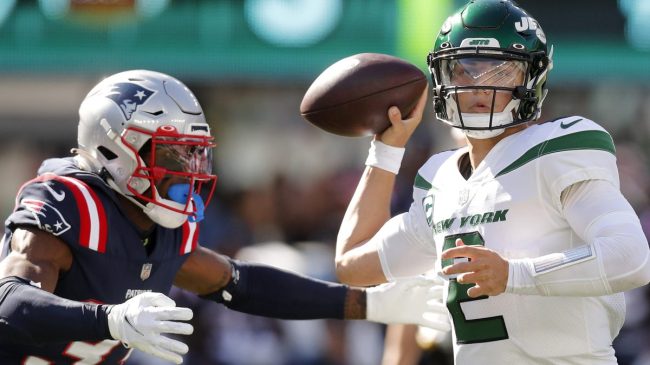 If the Jets win, the team will move to 7-3 and sit atop the AFC East. It would hold tie-breakers over both Miami and Buffalo. Yes, the Jets have beaten both Miami and Buffalo already, too. It would also slay the dragon of New England, which has defeated New York 13 times in a row. Moreover, it would sink the Pats to 5-5, with a short week trip to Minnesota for a Thanksgiving night game. That game figures to be a loss and would then make New England 5-6 in a very difficult AFC.

However, if New England is able to win, it could be devastating to New York. The Patriots and Jets would both be 6-4, with New England sweeping the series and owning the tiebreaker. It would also move New York to last place in the division. It would also bury the Jets down the playoff chain and be hard to overcome mentally.

That is a major swing for both teams. A must-win for each.

Now, with this DraftKings offer, you have to pick the winner to collect.

Interestingly both are coming off of their bye. And curiously, the NFL schedule makers did not waste much time sorting out a rematch as the two just played on Oct. 30, with New England coming out on top, 22-17.

In the one game since then, the Jets revitalized all expectations for the team with a thrilling 20-17 win over Buffalo. The Patriots beat the Colts, 26-3, in the game that cost Frank Reich his job.

The key to this entire game is Zach Wilson. Truly, it is that simple.

Jets fans — whether a Wilson believer or hater — will both admit that the game against New England was his worst game of the season. Maybe his career.

Wilson threw three interceptions in the contest, and a costly sequence turned a 10-3 lead into a 22-10 deficit in short order. One of the Wilson interceptions could have been wiped off the board or actually flipped a score and ended the game. If the Jets were disciplined.

On the subsequent Patriot possession from a Wilson error, the Jets secondary took back an 84-yard pick-six of its own. The play was called back for roughing the passer. The Patriots added three points on the drive, and instead of being down 17-3 at half, they were confidently still in the game at 10-6.

The errors will not happen this time. Wilson looked poised against Buffalo — and maybe it was just nice to see zone and not blitz with a man behind? — but for whatever reason, Wilson was different. Felt different anyways.

James Robinson is now more engrained with the offense. Michael Carter II is more explosive, but having a heavy bag to throw at the Patriots front will make an impact. Having Corey Davis play will make a difference at receiver, allowing the others to move to natural positions. Having Conklin and Uzomah at tight end will make a difference. There is also the statistical probability that Wilson simply won’t have a game that bad again.

The Patriots have succeeded with smoke and mirrors this season. The team just is not that good. Mac Jones has been average at best. The passing game is 23rd in the league. The backfield also just feels lackluster and is ranked 17th in the league.

There is something about this game that has it being the time for the Jets to get over.

Take the value with the J-E-T-S as the plus side on the money line and get $150 back when they win! (That’s $150 in addition to your winnings)