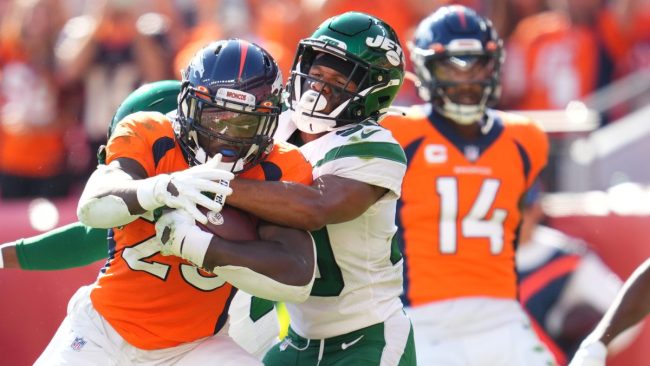 Just as everyone predicted coming into the season, one of the teams in the game between the Broncos and Jets is near the bottom of just about every offensive category. Of course, as the line goes, it isn’t the one anyone predicted.

The 2-4 Denver Broncos are the lowest scoring team in the NFL. The Broncos have the worst red zone percentage in the league. And the offense can not stay on the field, converting third downs in the bottom five.

Russell Wilson is playing like he is completely washed. He is not running despite saying that using his feet is part of his game. His deep touch is gone despite having more weapons than maybe he has had in years. The offense is going no where fast.

I, like you, can not believe that to be true (even though statistically it is). I look at the Broncos each week as the team primed to burst out and score 30 points. It just never happens. Not even close. Analytics would say acceleration to the mean has to kick in, and soon.

Also, like everyone predicted, one team has a really good defense that has been shutting teams down, and winning games.

The Jets are 4-2 and have won three straight. That coincided with the return of Zach Wilson coupled with the growth of its secondary. The defense and rushing game are carrying the load; it has been a formula for success. Sauce Gardner is looking like the next lockdown corner for the Jets. Quinnen Williams is playing like he is ready to take the mantle from Aaron Donald for best interior lineman.

Offensively the group has deflated the ball. New York opened the year with Joe Flacco and threw 156 passes in three games. In the last three, it has just chucked up 76 passes. It has also piled up rushing attempts with 33 in each of the last two games. That is compared to just an average of 19 times in the first three.

Again, I, like you still can not believe any of that to be true (even though it is). I look at the Jets each week as the team primed to see its defense regress, turn it over, and it get stomped by 30. It just never happens. Not even close. Analytics would say regression to the mean has to kick in, and soon.

This game actually tests advanced analytics much more than that over simplification. Take the Broncos on the moneyline to get $200 back (plus your winnings) when they win!