FanDuel: Bet $5 On Kansas vs Kansas State & Get $125 Back Instantly 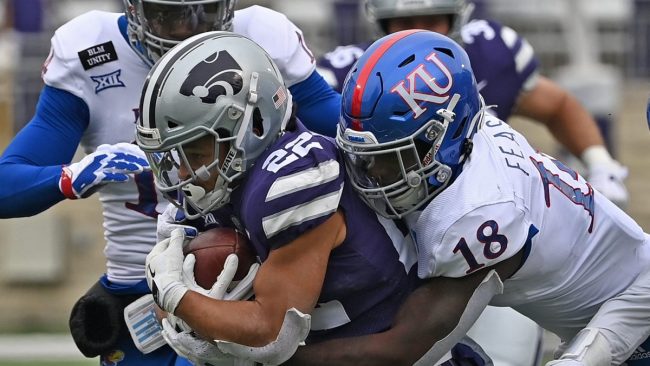 Kansas, I believed in you first; believed in you longest. I was here predicting the win over Iowa State in September. I stayed on the ship through Oklahoma and refused to leave against Texas Tech. The Texas loss broke me.

As a proud, potentially founding member of the 2022 Kansas bandwagon — I love that FanDuel let me close the offer season with one more for Kansas. If you are a fan of the Jayhawks, you can bet the KU moneyline and get $150 back for free. You might lose the initial bet, but you are getting that bonus. There is a part of me that wants to, for old time sake, take Kansas on the moneyline and get that $125 back instantly for FREE!

Unfortunately, that is not where I think this goes.

Kansas State has been the better team almost all season. It certainly has plenty to play for this week, too.

The Wildcats are hosting the game in Manhattan. On the line is a trip to the BigXII title game. It would, in theory, lock the team into a Sugar Bowl appearance, which would make this season a success by almost any measure.

Kansas State quarterback Will Howard has been a revelation this year. The Wildcats had designs on redshirting him and letting him sit because of Adrian Martinez — and to open the year, it was a sound plan. Since Howard has been in the lineup, the team is scoring a ton. When he starts, the team is averaging 48 points per game. In total, 38.8 games that he plays.

Look to the defense of Kansas State to be the difference.

The defensive line has been disruptive this season. ‘King Felix’ Anudike-Uzomah is getting most of the attention — Eli Huggin and Nate Matlack are getting attention, too. Brendan Mott made noise last week with three sacks against West Virginia, and his development will be huge.

Behind them is a banged up secondary. Kobe Savage was lost to a season-ending injury against Baylor.  Cincere Mason also did not finish the game last week against West Virginia — and he may be available, but not official as of this posting.

Suffice it to say Kansas State can still control its own destiny. That destiny does not include a loss in The Sunflower Showdown.

Take the Wildcats money line & get your free $125 from FanDuel… plus what you bet when they win.