FanDuel: Bet $5 On Michigan State vs Penn State & Get $125 Back Instantly 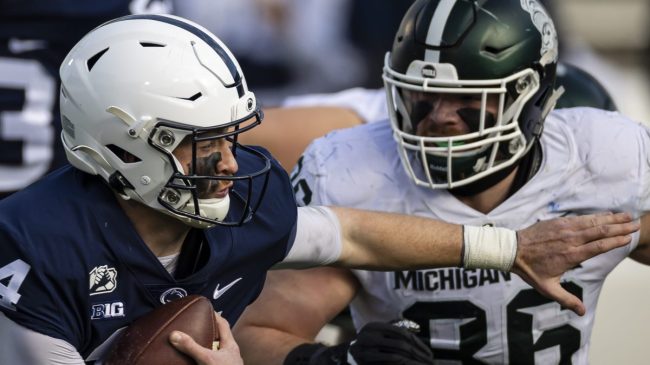 With all due respect to all other rivalry games: I love Land Grant games. I am old school, and I think those rivalry games are gold. Sparty and the Nittany Lions getting together is always a great game.

What that means is that usually they are closely contested, too. Good football! The game this weekend opened with Michigan State as a 16-point dog. Experts expect a Penn State rollover game. I kind of do too.

FanDuel, however, wants everyone to win. Go STATE. Either one. Bet on Michigan State or Penn State and get $125 back instantly for FREE!

That said, if you want to win the front of the bet, there is a better angle. Penn State is going for its first 10-win season since 2019, and it is in a good place to do so.

On the flip side, and it lines up almost exactly how Penn State likes it.

Check out these numbers for PSU: It averages 35.9 points per game, which is No. 19 in the FBS. As for what it wants to do on offense? The Nittany Lions average 250 yards passing and 184 rushing. That aligns almost exactly what Michigan State allows. Penn State is going to make those numbers happen.

Michigan State has a ‘lone hope’ of its running attack. If it is able to grind the game and keep Penn State on the sideline, that is the best shot it has.

Jalen Berger has been a great addition since his transfer from Wisconsin. He has nearly 700 yards, and six touchdowns on 141 carries this season. He has had three straight positive games and has a lot of momentum. That said, the offensive line isn’t that of other teams Penn State has faced. Neither is the offensive line.

It is pretty simple here: Take the Nittany Lions moneyline to win the front end & get your free $125 from FanDuel.

What is great is that if you are a Spartan fan, you can stay true to your team and get rewarded. Hell, if they win, you stand to profit from the great value on the money line. So, if you want, take the Spartans moneyline to win the front end & get your free $125 from FanDuel.