FanDuel: Bet $5 on the Commanders vs Falcons & Get $200 Back Instantly 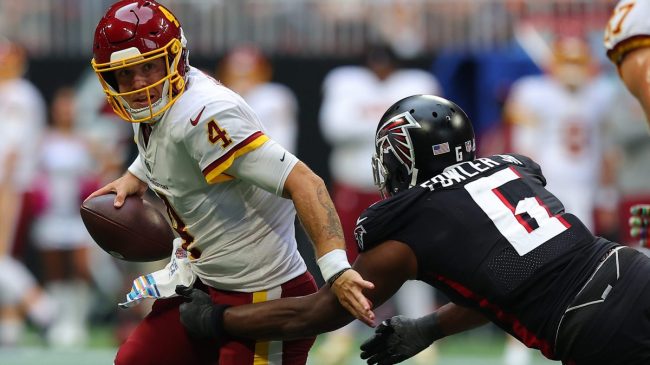 Yes, the title is true; we legally cannot lie to you. Sports betting is LIVE in Maryland & Big Casinos are trying to swallow each other whole. Until that happens, we all get a little bit of money in our pockets.

Well, well, well, Washington Commander Fan… I bet you did not have designs on a playoff push this year.  Yet, here we are.

Washington has let Taylor Heinicke be Taylor Heinicke and not a substitute Carson Wentz. His grittiness has elevated him to be a team leader — even if it is the running game and defense that are carrying the load.

A 5-1 stretch has pulled the team to 6-5, and currently in 8th place in the NFC. Dallas and New York play one another on Thursday, meaning that barring a tie, one will come out with a fourth loss and only a one-game lead in the division with a lot of games to play.

Washington has deflated the football, opting to pound the rock and play defense.

It is the same formula that is expected to keep working.

The Falcons are very familiar with several of the recent teams that Washington has dominated. On both sides of the ball, Atlanta is just a better Houston. It is also a lesser Philadelphia.

Atlanta does not stop the run well on defense. Oh, it is also allowed the most passing yards in the league through 11 weeks. Everyone should eat — including Logan Thomas in this game.

The Falcons have a couple of offensive pieces — more than Houston, but less than Philly — and can be slowed.

All tallied, Atlanta is also a smoke and mirrors 5-6. The team is just not very good. Name its leading rusher this year. (It is Tyler Allgeier). Atlanta just lost Kyle Pitts for the year. The Falcons have one receiver with over 30 catches.

It remains true that Marcus Mariota is not a very good passer. In this offense, he has a season high of 253 yards. He has six games under 150 in the air. He doesn’t really run that effectively anymore either — hitting a career high in carries but career low in average per attempt.

“‘Hey, we really do control our own destiny if we stay focused in on one game at a time,'” Rivera recalled. “Then, Jonathan (Allen) talking about the details of what we do, I think that’s another really good example of the guys understanding the messaging and buying in.”

Washington has a lot of control over the rest of its season and needs this win. It has The Giants twice, the 49ers, and the Cowboys remaining. All of those teams are ahead of it in the playoff race. If it wants to hold a spot, it has to hold off Atlanta.

Atlanta has played one of the softest schedules in the league and has some of the worst results.

Washington is for real. It is a team that packs its lunchbox and goes to work. Take the Commanders on the moneyline & get your free $200 from FanDuel!