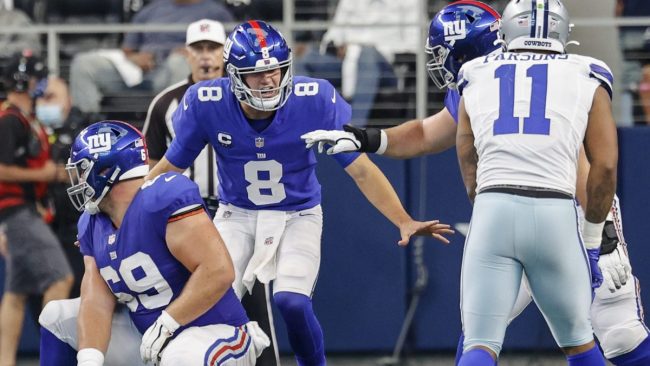 We are all about to find out a lot about the Giants. The lesson will be shared in a very public way with a nationally televised Thanksgiving game against the Cowboys.

FanDuel is making this offer great because it doesn’t really matter who wins. They are still sticking money in your account. So you can take either side of this game and come out with a stack to bet on the next.

That said, we want to win the front end of the bonus.

This game is all about the Giants.

This is the first game of the season with real expectations on them.

Let’s be honest: We all figured the Giants would stink this year.

I like to fancy myself as an early adopter. I was on the team after the first Cowboys loss when they were a dog to the Bears. After the Giants went on to beat the Packers and Ravens as underdogs, more folks paid attention. There was the dismissal of those wins because of the fluke-feel to it. It is why the Giants were still dogs to the Jags when we rode them again. We took that same vibe to the win against Houston, too.

So when the Giants got to 7-2, (maybe) people were actually believing. Then the Lions came to New York this weekend, and the Giants looked like what everyone figured in a 31-18 loss. Daniel Jones made bad decisions and threw costly picks. New York had three turnovers on Sunday; it had eight all season prior to that.

Any analysis of the Cowboys is tainted by the total domination of the Vikings. But it gives us an interesting case study of human nature.

The Giants are about to start its NFC East swings of games against Dallas. It will then play Washington, Philadelphia, and Washington again — and then cap off December with a Christmas Eve test at Minnesota.

Dallas would sure like to have it, but it has to be flying high. Most inside and outside the locker room have them as a playoff lock. Heck, the Cowboys already beat the Giants this year — and that was with Cooper Rush at quarterback. It just crushed what everyone had as the top team in the conference.

Every reason in the world would be to say Dallas is a good bet to win this game… and at nearly (-300) on the opening line, most expect them to. A short week is a natural reason to slack. Coming off of a big win is another. Playing a team that you have beaten 10 out of the last 11 games is a trio for disaster.

Dallas enters this game looking ahead to a long break after beating what it has to view as a little brother. New York is going to show everyone if it is for real this week or if it is going to suffer a crushing December disintegration.

I like when one side has its back-to-the-wall and the other is flying high. It makes for an emotional edge. Take the value on the G-Men moneyline (+240 opening) & get your free $125 from FanDuel whether they win… or not.