Get A Free Bet Up To $1,250 On Michigan v Penn State With Caesars 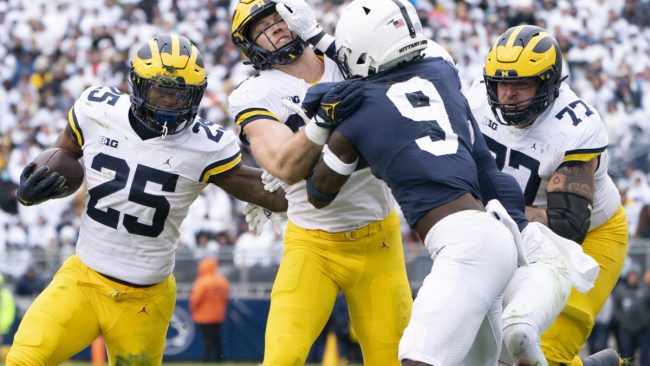 The first B1G battle to determine the East Division champion will happen Saturday at the Big House. No. 5 Michigan returns home after two road wins to play host to No. 10 Penn State. The two teams enter with a combined 11-0 record but also plenty of questions.

Michigan and Penn State are boasting top defensive units, each having held all but one of their opponents to 14 points or less. It should be noted that the Michigan slate of opponents were Colorado State, Hawaii, Connecticut, Iowa, and Indiana. The team gave up 27 to Maryland. Penn State put the clamps on Ohio, Auburn, Central Michigan, and Northwestern. It also gave up 31 to Purdue.

It is a maddening stack to sift through as you determine relevant angles to play.

The position that tips this game is at quarterback.

Sean Clifford is sixth-year player for the Nittany Lions, and a four-year starter. Usually that is a decided advantage in a football game, but at this point everyone knows what Clifford is and what he isn’t. He is a solid, if not steady option. He is not a guy you bet on to win you games.

Clifford has been decidedly average (again) this year. His 10-for-20 with 140 yards passing against Northwestern did not quiet fans. It should inspire your play. To save you the search: his backup is Drew Allar. Allar has played in four games and has a mop-up duty stat line of 12-for-19 for 163 yards and two touchdowns. If Allar is put it, that is bad news for Penn State. The offense is fine but does not have a playmaker. It will have to grind out yards against a defense that is not going to allow that to happen.

The opening line (Michigan -7.5) and total (52) are both tricky lines that need to be paid attention to if you are looking for value on this game. The play that makes the most sense here is the moneyline, even at (-285). You are using this play as a free bet, so you want to be as close to free money as you can get.

Michigan is more dynamic on both side the ball and will be able to slow Penn State down. Will it cover? That is tough — especially with the hook — but for my money, Michigan is going to win and I’ll ride with that to the window. If you do not want to lay the long odds, look at the under. Penn State will struggle to move the ball. Michigan could struggle to pass and have to keep it on the ground. In that formula, the clock will move quick and 52 points will be tough to get.

Roll with Michigan on your free bet up to $1,250 with Caesars.