Hey Maryland! Bet $5 On the Monday Night Football & Get $200 Back Instantly With FanDuel

#Football
BroBible may earn a commission if you buy a product or service via links in this article.
by Dallas JacksonNovember 19, 2022 10:06 am 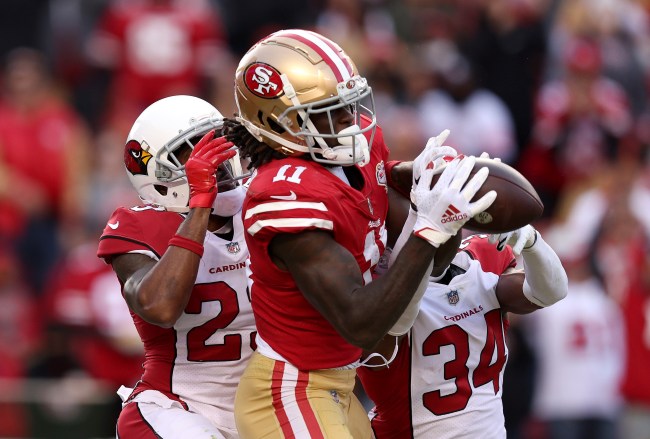 Yes, the title is true; we legally cannot lie to you. Sports betting is officially live for 8 hours from 2pm-10pm on Monday, November 21st before fully launching on Wednesday! Big Casinos are trying to swallow each other whole, and until that happens, we all get a little bit of money in our pockets.

The battle in the NFC West is one of the most interesting in the league. Many will look at the AFC (and NFC) East to make an argument for that spot. But as it sits, there is a case to make that three teams from each of those divisions will make the playoffs. For the NFC West, it is likely to be a one-team Division and this game could knock the loser out of the race (Arizona) or considerably hurt it (San Francisco).

(While it is silly to say “neither team wants to lose this game” … as though there are games that teams want to lose .. in this case, it could be an elimination game at mid-season.)

Arizona is 4-6. This game is a pivot on its season. At 4-7, Arizona may be all but mathematically eliminated as it is still to face challenging games. The Cardinals will play the Chargers, Patriots, Bucs, and 49ers again. That is not to discount the defense of Denver mixed in there with a trip to Atlanta. A loss could create a spiral that ends with coach Kliff Kingsbury back in the college ranks.

San Francisco has a little more wiggle room, but not much. PFF has the 49ers at 88% odds of making the playoffs with a win, but it drops to 60% with a loss. That makes sense, as a win moves the team to 6-4 and a tie with Seattle atop the West. A loss, the team slides to 5-5 and really into the thick of a race with tough contests versus Miami and Tampa, division games with Seattle and Arizona again. Even with winnable games against Washington and the Raiders, this game is big.

But, who will win?

That is the most important question. This offer requires betting on the winner.

Monday Night Football games have gone to the home team at 7-4 record this year. The number is on par with historical averages and — at least until Week 7 — was predictable.

Dallas bettered New York on the road, which was expected, before two more home teams won: San Fran over the Rams; Kansas City bettered the Raiders, and the Chargers downed Denver, too.

After that most folks were probably 6-1 (as I was) on MNF.  That one loss is probably universal since, I am not sure anyone thought Denver would be so bad on offense.

Then Chicago went and blew out New England. In New England. Cleveland, at home, upset Cincinnati. Baltimore went and downed New Orleans, which was predicted but still on the road. All of that was before  Washington beat Philly on MNF. On the road. That was a stretch that most everyone went with one win (Baltimore) and a few shockers.

This game comes down to the QB position.

Jimmy Garoppolo will be under center for the 49ers. It is up to you to decide that that means. He is 10-2 as a starter when he doesn’t throw a touchdown — “best” in NFL history. He is 27-15 when he does.

Arizona is still a fluid situation. It is also impacting the moneyline. Kingsbury gave a coachspeak update on Thursday, telling reporters he did not know who would play yet.

“I’m hoping at least one of them [will be healthy],” he said at a presser. “I think we should be able to get to that point hopefully by later in the week.”

I think it is gamesmanship. Murray was at practice and the Cardinals need this game. He has to play. It has been a month since Call of Duty came out (just kidding, he has a hamstring injury).

There are two schools of thought on this bet.

One, you can assume it is gamesmanship. Which probably means that Murray is going to play and they just don’t want to say it. If you believe that to be the case — which I do — I would take the incredible value on Arizona. The Cardinals were +260 dogs (opening) and if I suspect Murray is playing, that is a button to push.

Two, you can vote no-confidence on Murray… and even less on also-hurt backup Colt McCoy… and take SF. It is a stiff line to take (-315 opening) when you do not know what you are going to get from the opposition.

With the value, homefield disrespect, and back against the wall … roll with Arizona and get $200 back into your account no matter what happens!*****