Hey Maryland! Sports Betting Is Live – Bet $5 on the Ravens vs Jaguars & Get $200 Back Instantly 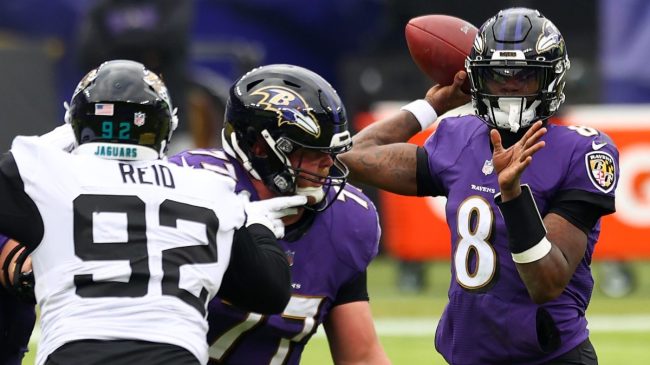 Baltimore did not play great on Sunday, and it bettered Carolina. The 13-3 victory did not inspire a ton of confidence, but it did not have to. It just has to go on the docket as a ‘W’ and move on to the next.

In fact, it is what Baltimore can do the rest of the season and still lock down a playoff berth. It has the easiest schedule remaining, so the team can get into the playoffs before December ends if it just checks boxes.

The right play for building a bankroll is taking Baltimore on the moneyline.

Adding the offer from FanDuel makes the decision easier. Take Baltimore to win, get $200 back instantly for FREE; when they win, you count your winnings plus that bonus.

Jacksonville is coming off of a bye and is playing at home. Those are the two things going for it.

Baltimore is better at quite literally every position group on the field — though the Jags are acquiring a pretty young and talented core. I am also not a Doug Pederson fan, so I favor John Harbaugh and most of the Ravens coaching group.

Suffice it to say Baltimore is better across the board (on paper). There is nothing to indicate your play should be Jacksonville other than if you have a gut feeling. If you do, go for it. This is the offer for you; you get $200 back instantly for FREE. Even if you take the Jags and they lose.

The addition of Roquan Smith to the defensive side of the ball for Baltimore only makes me more confident. Smith — in and of himself — is a tremendous addition. He has a nose for the ball. Can play sideline to sideline. Is one of the surest tacklers in the league. Moreover, he has made that side of the ball even better. Patrick Queen has been insane — he led the team with 12 tackles against Carolina. Call me crazy, but the secondary has been able to play confidently closer to the line, too. It might have been a design to dare Baker Mayfield to pass, but it worked — and should again. Marlon Humphrey looked really well last week, too.

Baltimore is allowing the second-fewest yards on the ground. It is also gaining the second most. The formula is pretty simple. It will also be effective. Jacksonville has given up the fifth-most yards in the NFL per game over its last three contests. It is not the NFL darling that it was when it beat the Chargers. That team alerted everyone to pay attention to “Jacksonville” on the schedule.

Baltimore is not an overlook type team. It is a lunchbox squad, and that win. Take the Ravens on the moneyline & get your free $200 from FanDuel!