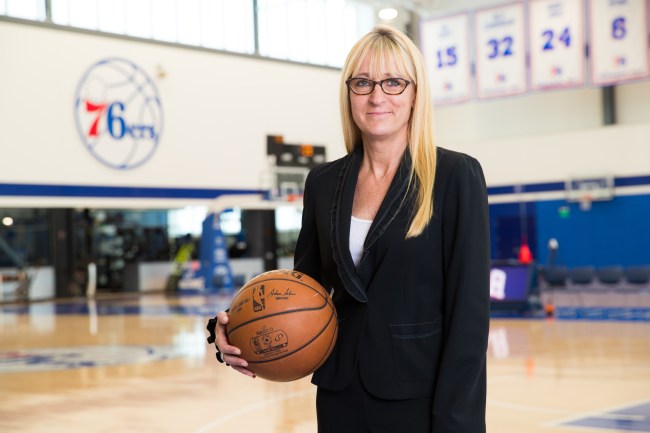 SportBusiness Summit 2018 will take place next Tuesday/Wednesday (September 18/19) at the W South Beach hotel. A world-class line-up of speakers and panelists – from FIFA, UEFA, La Liga, Premier League, DAZN, Twitter, Sportradar, BeIN Sports, Miami Marlins and Philadelphia 76ers – will offer attendees the data and insights needed to identify new business opportunities and potential revenue streams in markets across the world. Who’s driving sport and where are we heading, the U.S. sports betting revolution, trends and issues in Global TV rights and private equity in sports are among the panel discussion topics. SportBusiness will power the “know the fans” panel featuring Lara Price (Philadelphia 76ers COO, Keith Bruce (Formula 1 Experiences), Chip Bowers (Marlins President of Business Ops) and Sandy Brown (Commissioner of MLL). JohnWallStreet had a chance to catch up with Lara Price, the 76ers COO, for a brief preview of the forthcoming discussion.

JWS: Philadelphia is a passionate sports town and its fans have been known to be vocal when their teams don’t perform well. How does the 76ers approach to fan engagement change when you have a winning team (like last year) vs. the losing-filled “process” years?

Lara: Early on we made sure we were transparent with what we were going to do (i.e. The Process). In the past, we let the team’s record speak for itself.

One of the specific things we did (during the down years) was to create one-on-one touchpoints with our fans. With the help of basketball operations (and in partnership with Firstrust) we arranged a private dinner with our Row 1 seat holders. Coach (Brett) Brown and the coaching staff gave a two-hour tutorial about how we were developing each of our players and the franchise’s mindset on the rebuild. He also met with season ticket members pre-game and answered their team-related questions; Scott O’Neil (HBSE CEO) and Chris Heck (76ers President of Business Operations) also met with our season ticket members.

JWS: Do you tone down fan engagement when you’re losing because there is less interest or do you need to crank it up because it is more difficult to sell tickets?

Lara: We crank it up. As you’re building your base, it’s easier to do the one-on-one touch points that I mentioned earlier; as your base gets bigger, it becomes more difficult to provide all those touchpoints. We do an event now for season members and invite 5,000 people. It becomes difficult to get a player (or coach) one-on-one with every single person. So, now we must become more creative to bring those special moments to our fans; we must figure out how we’re going to touch more people with personalized content or touchpoints.

JWS: The 76ers top 2 players are foreign born – Joel Embiid (Cameroon) and Ben Simmons (Australia). I wrote a piece earlier this week discussing how country pride trumps team loyalty amongst Latino baseball fans. I’d imagine there is similar enthusiasm for Joel and Ben (and thus the 76ers) amongst basketball fans in their native countries. What has the team done to specifically to engage Australian fans?

Lara: We have global ambitions, not just in Africa and Australia, but in China too; we played in London last season. Having several foreign-born players brings international scope to the 76ers. Building content (in some cases in their native tongue) around each of those players is very important to us. That means having people write stories, cover the team and provide information so that we can continue to grow those markets. We’re not there with every market yet, but we have one Mandarin-speaking producer (result: Weibo ranking has gone from #26 to #5) and now we’re focused on getting coverage for each foreign-born player in their respective international market (roster also includes players from: Croatia, Antigua and Turkey).

With Ben specifically, we worked with the league office and we were able to do a sponsorship with Four’n Twenty; an Australian meat pie (Ben’s personal favorite). So, we brought them to the U.S. and activated them here in the arena (note: league rules dictate how teams can market internationally).  We’ve gone over there (Australia) a couple of times to engage other Australian companies (to get them to work with us) and we’re playing against the Melbourne International team in a preseason game; Australian television is interested in broadcasting the game because Ben is so popular over there.

Howie Long-Short: Despite the 76ers winning just 75 games between over a 4-year span (’13-’14 through ’16-’17), the team managed to quadruple its season ticket base. Heading into the ’18-’19 season (as a favorite to win the Eastern Conference), the franchise is sold out of season ticket memberships and has 11,000 people on its waiting list; a total that surpasses Allen Iverson’s glory days.

Four’n Twenty is a subsidiary of Patties Foods. The Australian food manufacturer (they also make baked goods, frozen fruits and pre-made desserts) trades on the Australian Stock Exchange under the symbol ASX: PFL.

Fan Marino: The 76ers rebuild has been a success because Ben Simmons (selected #1 overall) and Joel Embiid (#3 overall) have turned into All-Star caliber players (they also selected Markelle Fultz #1 overall). Come the ’22 draft though, NBA teams may not have to pick in the Top 3 to land a franchise caliber player. 2022 is the year the NBA is expected to re-allow HS seniors to enter the draft, meaning the player pool will be deeper than it’s ever been; the hybrid class will contain the best HS seniors as well as the best college (or international) prospects (as it would in a typical year). Of course, that means that 2023 is likely to have a weak class as the best prospects from the 2022 freshman class never made it to college.