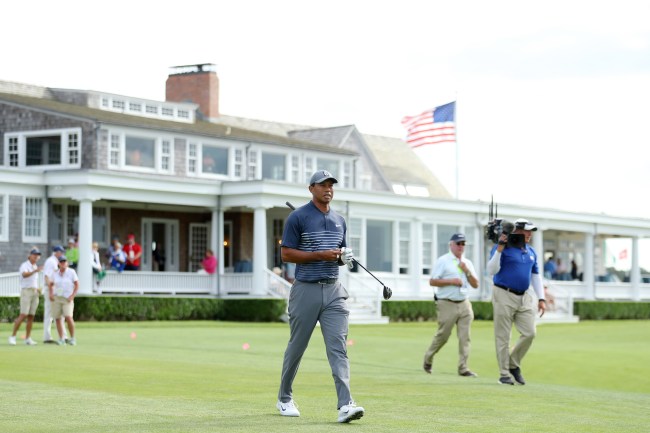 SOUTHAMPTON, NY - JUNE 14: Tiger Woods of the United States walks during the first round of the 2018 U.S. Open at Shinnecock Hills Golf Club on June 14, 2018 in Southampton, New York. (Photo by Warren Little/Getty Images)

The first round of 118th U.S. Open was completed on Thursday at Shinnecock Hills (Long Island). Just 4 players (Dustin Johnson, Russell Henley, Ian Poulter and Scott Piercy) finished under par (all shot -1) as 15-20 mph winds made for a tough opening round; the field combined for 189 double-bogeys or worse. JohnWallStreet was in attendance and had the chance to speak with Lindsay Ulrey, Director, Global Experiential Marketing & Partnerships at American Express (AXP) about why the company dedicates such a large portion of its marketing budget to the U.S. Open, what it looks to accomplish at the event and how it measures success.

JWS: The U.S. Open (Golf) and the U.S. Open (Tennis) are the two big experiential events on the American Express calendar. How did you select those events as opposed to something with broader appeal like the Super Bowl?

Lindsay: We’re lucky that we have a team of great researchers and we know that our card members are passionate about golf and tennis, specifically. So, it’s extremely important that we explore opportunities in both of those spaces, where are card members are, and that we show up in relevant ways that allow us to really have their back in those moments.

JWS: What does American Express look to accomplish at a marquee event like the U.S. Open?

Lindsay: At our very core as a company we’re about service, so when we come to an event like this we really try to dig into what the customer needs are. We’ve been a partner of the U.S. Open for 12 years and with that, we’ve learned what the pain points are; what are the things people could really use help with on the grounds and what are the ways we can really surprise and delight them, in ways that are unexpected. You can look at the American Express radios that we do, giving fans the SiriusXM live feed in their ear. That’s a really unique benefit that addresses a pain point, as fans aren’t in front of their TVs to receive the broadcast commentary; now they’re actually able to hear the broadcast in their ear, on the golf course, while watching in real time.

JWS: What are some of the other pain points you guys have been able to solve?

Lindsay: One of the things we know about fans of golf is that they spend between 7-10 hours on a golf course. One major way we can come in as a service brand and play an important role is by having a place where our card members can come, relax, recharge and connect with their friends; so, for the first time this year, we have the American Express Card Member Club up on the 10th hole. It’s open to any card member and they can bring three guests. We have a whole bar, interactive programming and a view the fans are just loving.

Another thing we constantly hear from our card members is that it’s very hard to see what is happening on the golf course. So this year, every card member can simply show their card and we’re giving out complimentary binoculars.

We are also doing a couple of other things around the grounds that are more surprises as opposed to mitigating pain points. One example is the Epic Puttexperience that the USGA is putting on. It’s extremely popular, so we’re offering a priority access line for card members so that they can get to the front of the line faster.

JWS: How do you gauge success for an event like the U.S. Open?

Lindsay: When looking at an event like this, a lot of it is, how happy are we making our card members? Things that can’t be measured. We like to say at times that we’re in the happiness business. Really, it’s about offering things that make people feel love for the brand and having people walk away saying this event wouldn’t have been what it was without American Express.

Howie Long-Short: There’s a perception that golf is out of favor (total rounds down), but the U.S. Open’s economic impact report indicates otherwise; the sport has grown revenues +22% ($84 billion) over the last five years. As for the U.S. Open specifically, the economic impact of that event has declined over the last half decade. The 2018 event is expected to generate $120 million for Eastern Long Island. For comparison purposes, the 2012 tournament at Olympic Golf Club spawned between $140-$170 million, the ’15 tournament at Chambers Bay generated $140 million and Oakmont did $120-$135 million the following year.

As for AXP, the company reported net income grew +31% YoY to $1.6 billion, despite expenses (think: rewards, member benefits & partnerships) rising 10% to $2.5 billion. They reported $9.72 billion in Q1 ’18 revenue (+12% YoY), with cardholder spending (+12%), loans (+16%) and the company’s global issuing business (+3.5 million cards) all showing steady growth. CEO Stephen Squeri, who took control of the company back in February, has been pleased with what he’s seen during his first few months on the job saying, “we feel good about our progress…we expect revenues to be up at least 8 percent this year and EPS to be at the high end of the $6.90 to $7.30 range we set back in January.”

Fan Marino: American Express doesn’t limit their partnerships and promotions to country club sports, the company has established them across the sports world (see: NBA Store, ESPN+). NBA fans will be excited to learn of their most recent collaboration with Lionsgate. American Express is offering card holders exclusive access to purchase $5 tickets to an early screening of the Uncle Drew (Kyrie Irving’s character) film on June 19th – more than a week before it opens in theaters nationwide on June 29th. Tickets can be purchased here through Atom Tickets.