Andy Ruiz Jr.’s Family Made A Boatload Of Money By Betting On Him To Beat Anthony Joshua 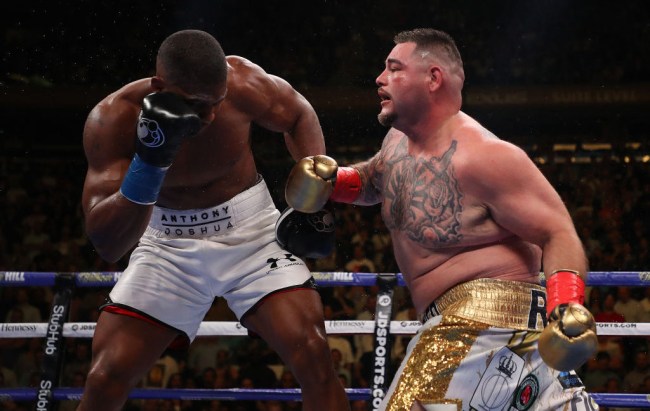 On Saturday night, Anthony Joshua stepped into the ring against the absolute unit who is Andy Ruiz Jr., and while the guy with two first names was expected to retain his heavyweight title, it’s safe to say things didn’t exactly turn out as anticipated.

Andy Ruiz doing it for the dudes with the dad bod. Respect!
(via @DAZN_USA #JoshuaRuiz pic.twitter.com/E177uQD1ep

While he might be a professionally trained fighter who’s been grinding for years in search of the opportunity he took full advantage of over the weekend, you wouldn’t really know it by looking at him, and the Large Adult Son immediately captured the hearts and minds of the internet as soon as the final bell rang.

Ruiz was listed as a +1200 underdog heading into the fight—which seemed like a bit of a sucker’s bet given Joshua’s credentials despite the potential return—and there’s at least one guy out there who probably wasn’t too thrilled with the upset.

Worst Bet Of The Night: A bettor placed a $100,000 bet at a William Hill sportsbook in Nevada for Anthony Joshua to win tonight. It would have netted $5,000 in a win. It paid nothing.

With that said, more than a few bettors were in Ruiz’s corner and Vegas ended up paying the price.

96 percent of all bets that William Hill wrote in the state of Nevada was on Andy Ruiz Jr. 90% of the total money, however, was on the favorite Anthony Joshua. William Hill’s Nick Bogdanovich said because Ruiz was 12/1, the money added up, making the sportsbook a “small loser.”

On Tuesday, Ruiz chatted with Jimmy Kimmel and shed some light on what it’s like to be the first-ever Mexican heavyweight championship.

While he was undoubtedly pleased with the result of the fight and the boatload of cash he made as a result of it, it turns out his family was also pretty thrilled based on how much money they made betting on him, as he revealed, “My dad, my brother, my mom…all of them almost made $10,000 off of me. They made $10,000.”

This year’s family reunion is going to be lit.