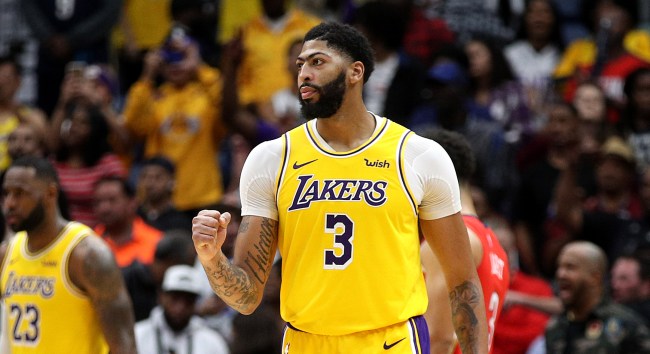 Okay, we have seen a lot of very impressive celebrity homes over the past few years, but this mansion located in Westlake Village, California being sold by Los Angeles Lakers star Anthony Davis might be the coolest one we’ve peeped yet.

Now, $8 million ($7.995 million to be exact) might sound like a lot of money for a house, but wow, this place looks like it would be worth every penny.

Davis bought it for just $7.48 million in 2018 and he’s already looking to sell? Does that mean he’s done in Los Angeles?

It comes with five bedrooms and 6.5 baths. (You’d really think there would be more of both. Right, Jeff Bezos?)

It sits on 2.3 acres of prime California land, and it needs that much space because in addition to the giant house, it also comes with a five-car garage, a guesthouse, a “one of a kind” indoor basketball court with its own viewing box, and a $1 million infinity-edge swimming pool with dual waterslides, a baja deck, and a spa.

This place is nucking futs.

I would gladly pay the estimated $39,762 a month in mortgage payments (with a $1.599 million down payment) to move into this house.

Anthony Davis is selling his Los Angeles home for $7.9 million. It has a: