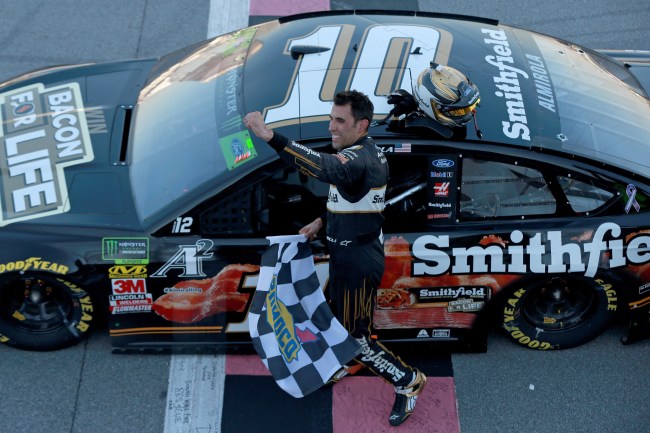 Aric Almirola is on to the 2018 Monster Energy NASCAR Cup Series Playoff Round of 8 (begins next weekend at Martinsville), having qualified with last weekend’s win at Talladega Superspeedway; Chase Elliott is also through to the next round with his 10.7 win at Dover. This weekend, stock car’s top circuit hits Kansas Speedway for the Hollywood Casino 400. Before the team left for Kansas City, JohnWallStreet had a chance to sit down with Almirola – the Stewart-Haas Racing driver (formerly of RPM) – to discuss how NASCAR free agency differs from other pro sports and why Smithfield Foods’ (his primary sponsor) decided to return to NASCAR in ’18 after announcing their intent to leave the sport last season.

JWS: You joined SHR in 2018 after having raced for Richard Petty Motorsports in 2017. Are most NASCAR drivers on year-to-year agreements with their teams?

Aric: There are some drivers that are driving year to year and then there’s Jimmie Johnson who can basically drive for Rick Hendrick for as long as he wants; Jeff Gordon, when he was driving, had a “lifetime contract” to drive for Rick. Everybody else is in between. You’ll see guys with 2-year deals, 4-year deals, 5-year deals, so it really just depends on the team, the organization, the driver and the sponsor’s commitment.

JWS: Is NASCAR free agency like other pro sports where teams go to great lengths to “woo” an athlete?

Aric: I think it depends on the driver. Some drivers will get wooed by teams that really want them and then there are drivers that will go out to various teams and try to sell them on why they should be hired. Our sport is very different in that regard. I would say it’s probably 50/50, maybe even 65/35, where the driver is the one going to the teams trying to sell themselves.

JWS: In 2017 Smithfield Foods announced they were planning to drop sponsorship of your car at season’s end, but they’re your primary sponsor this year. Why did they make the original decision to exit the sport and what ultimately drew them back in?

Aric: I just don’t think they had seen the results that they were hoping for, they were wanting to go to victory lane (Editor Note: Aric had just one Cup Series career win prior to Talladega); they were wanting to be more competitive and run up front. So, when they found out that I was going to Stewart Haas racing, they decided they wanted to continue to support me and give it (NASCAR sponsorship) one more shot. Smithfield loves NASCAR. They absolutely love the fans; the fans are their people. The consumption rate of pork products per capita of NASCAR fans is very high, those people eat bacon, ham, and pork chops, so to be able to continue to market to that demographic and to continue to support a sport that they love meant a lot to Smithfield. Now that we won Talladega and are heading into the round of 8, I know the executives at Smithfield feel validation.

Howie Long-Short: Smithfield Foods is a world’s largest pork processor and hog producer, and a leading consumer packaged meats company; the company reported $15 billion in ’17 sales. Their parent organization is WH Group, China’s largest meat producer; WH Group’s ’13 (for +/- $7.1 billion) takeover of Smithfield was the largest ever by a Chinese conglomerate of a U.S. company. WH Group shares (OTC: WHGLY) are down -28% since June 1st (to $14.76).