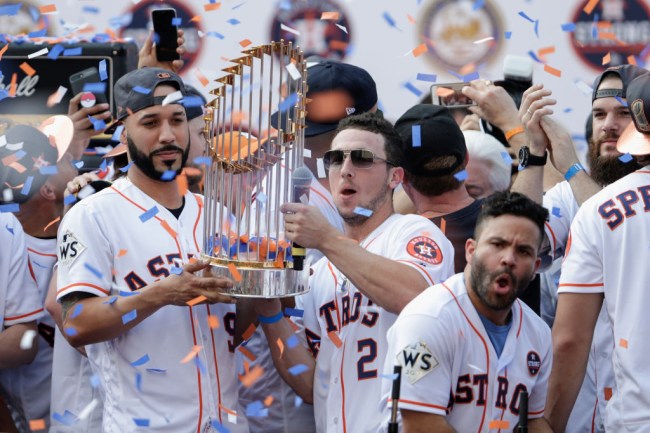 The Houston Astros had never won a World Series over the course of their 55 years of existence heading into the 2017 season, but when everything was said and done, they brought their first trophy back to their home city thanks to a combination of teamwork, dedication, and a metric fuckton of cheating.

Last November, multiple people who worked for the franchise during its championship run came forward and claimed the Astros had devised a system in which they harnessed a camera to steal signs and subsequently relayed information concerning the upcoming pitch to whoever was in the batter’s box.

After releasing a report that confirmed the Astros were, in fact, a bunch of cheating assholes, commissioner Rob Manfred dropped the hammer on the team by stripping them of their World Series title and suspending every player inv—oh, sorry.

He actually hit them with a slap on the wrist and failed to discipline any of the players on that year’s roster despite the ample amount of evidence that most of them were in on the scheme.

Players who did not win the World Series in 2017 are understandably a tad pissed about how the situation is being handled and guys around the league have not been shy about sounding off in recent weeks as they air their many grievances.

After Dodgers pitcher Ross Stripling revealed he hadn’t ruled out getting some revenge in the form of some good, old-fashioned plunking, Manfred issued a warning to teams and said anyone who purposefully throws at a member of the Astros this year will be punished more severely than any of the players who cheated were (which goes without saying because they literally got off scot-free).

However, there’s little doubt there’s going to be some retaliation once the season begins, and now, you can stand to make some money if you’re willing to gamble on just how much of that retaliation there will be.

According to The Pittsburgh Tribune-Review, multiple sportsbooks have released odds on how many times players on the Astros will be hit by a pitch this season, with the over-under currently hovering at 83.5 (you can also place bets on which member of the team will be beaned the most and if the first batter of the season will be on the receiving end of a ball that’s juuuuuust a bit outside).

ESPN reports only nine teams in the league have been collectively hit by 84 or more pitches over the past five seasons but none of those teams have been at the center of the biggest scandal to rock baseball since the Steroid Era came to an end.

I don’t claim to be a gambling expert by any means, but with that said, I’m hammering the hell out of that over.