Take A Look Inside The Baller Crib Austin Rivers Is Selling In L.A. For $7.5 Million 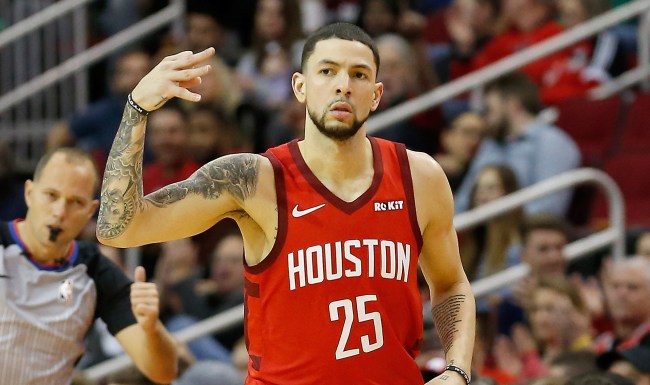 Much like Tyronn Lue and Paul George, Houston Rockets guard Austin Rivers has found himself with a baller home in a city where he no longer conducts business on a regular basis.

Rivers, who spent five seasons with the Los Angeles Clippers before being traded by his dad Doc Rivers to the Washington Wizards in 2018, is selling his sweet house located in Pacific Palisades for $7.495 million.

Considering that he is asking for about $1.4 million more than he paid for the property, Rivers stands to turn a tidy profit should the home sell for around his asking price.

The 7,400-square-foot house was built by Huntington Estate Properties in 2016 and among the home’s features are six bedrooms and seven bathrooms with hardwood flooring with Surround Sound throughout.

According to Huntington Estate…

Downstairs there is an office, a theater, and a great room with a wine cellar. Out back you get a very nice swimming pool, spa, and a built-in BBQ.

Sweet place for a 26-year-old to call home, don’t you think?

If you’re interested, Rivers’ place can be yours for just $41,020 a month in mortgage payments, according to the home’s listing on Realtor.com. That’s with a down payment of $1.499 million, of course. No big deal.