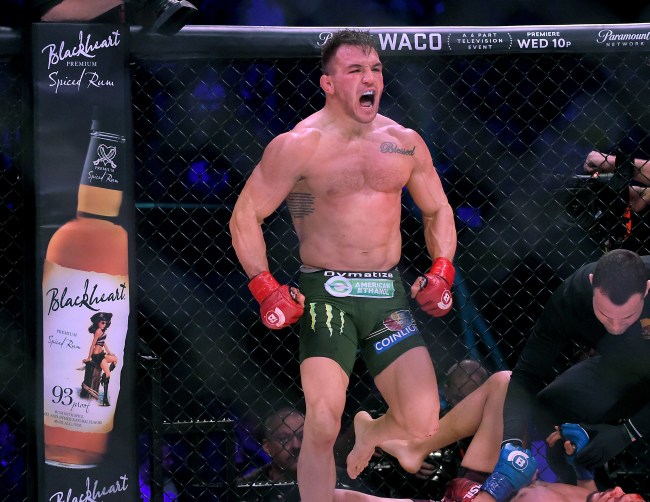 Editor’s Note: Welcome to a daily column we run here at BroBible breaking down the day’s biggest stories in sports business with commentary from the sports money and sports fanatic perspectives. It comes to us via our friends at JohnWallStreet, publisher of a free e-mail newsletter focused on sports related public equities and their subsidiaries. You can sign up here.

Bellator MMA and DAZN (pronounced Da Zone) have announced a joint venture to promote 22 fight cards annually (both live and on-demand), seven of which will be exclusive to the standalone OTT provider; the balance are joint broadcasts with Paramount Network (Viacom subsidiary). The multi-year pact, said to be worth nine figures (no word on if DAZN received an equity stake), gives the MMA promotion “the opportunity to truly challenge the UFC” (think: ability to sign free agents); UFC recently signed its own streaming deal (5 Years, $150 million/annually) to bring 32 fight cards/year to ESPN+. The first Bellator fight night broadcast on DAZN will be September 29th, with the main-event featuring middleweight champion Gegard Mousasi against welterweight champion Rory MacDonald; former UFC fighters Quinton “Rampage” Jackson and Wanderlei Silva are also fighting on the card.

Howie Long-Short: Perform Group is a subsidiary of privately held Access Industries. The sports media company counts The Sports News and Goal among its U.S. publications. While you can’t invest in Perform Group, there is one way to play DAZN; Dentsu, a Japanese advertising firm that trades publicly on the Tokyo Stock Exchange under the symbol (TYO: 4324). No information has been released relating to the size of Dentsu’s investment or the valuation placed on the company.

Perform Group has been on a roll. Just last month, the company announced the hiring of former ESPN President John Skipper to lead DAZN (operates in 5 countries – Germany, Austria, Switzerland, Japan and Canada; U.S. and Italy to debut in ’18) and the company made the largest investment in boxing history, a $1 billion joint venture between DAZN and Matchroom Boxing. DAZN has opted to corner combat sports, as it makes its entry into the U.S. market, with rights to the Big 4 leagues tied up through the remainder of the decade.

Fan Marino: Flush with cash (Viacom is also increasing its investment), Bellator will now look to add top-tier talent to its strong welterweight division. The promotion is set to launch an eight-fighter grand prix (think: bracket style tournament) within the division, on the September 29th card. I met with DAZN CEO James Rushton at the Hashtag Sports conference on Wednesday to talk about how they plan to develop fighters into household names and to discuss any concerns they may have about investing in fight sports, with talk of brain injuries so prevalent.

Fan: SI released a story this week surrounding the suicide of Washington State QB Tyler Hilinski (autopsy showed he had CTE). The story has raised questions about the future of the game of football. Perform Group has committed over $2 billion to fight sports. Are there concerns that as people become further educated on head injuries, combat sports will see a decline in popularity?

James: The simple answer is no. Unfortunately, occasionally in boxing or mixed martial arts there are tragedies and you can’t escape that. What we’re doing is making sure that the events we put on and the money we’re giving to Matchroom Boxing and Bellator ensure that the athletes are being looked after as much as possible. For instance, dedicated ambulance routes that are pre-designed to make sure you get fighters to the hospital as quickly as possible. It’s a risk we recognize, but not something that puts us off.

Fan: UFC viewership declined double-digits in 2017, as the promotion has struggled to develop mainstream talent beyond McGregor and Rousey. How does the DAZN/Bellator joint venture avoid the same fate?

James: Our job is to create an ongoing narrative, an ongoing dialogue about these fighters. The whole system of PPV has strangled the life out of fight sports because the fights are rare and because people don’t know the characters or personalities around these fighters; 25 years ago, these fighters would have been household names. We can solve that issue in two ways. One is to make the platform far easier and cheaper to access, which we are doing, and two is to invest our marketing dollars in content, production and talent to tell the story; and then not putting those stories behind a paywall, distributing those stories where the audience is.

Fan: It was reported that the Fox Sports app was the 3rd most downloaded application last week, after not being in the top 1000 the week prior; of course, exclusive access to World Cup broadcasts drove the increase. A marquee event like the World Cup could quickly put DAZN on the map in new markets. Is that an event you will look to acquire rights to in the future?

James: Listen, we’re a business that was founded on soccer. Perform Group’s first clients were soccer clubs, our first broadcast rights were soccer rights, I launched our service in Japan by buying Japanese soccer rights for 10 years ($2 billion). So, of course we’re going to be interested in soccer rights, but it’s like a lot of other rights in the U.S. – it’s a competitive landscape and its fragmented. What we want to do, like we have done with the fight sports, is enter into a genre and try to own it end to end. That doesn’t mean you must own everything, but I’m not overly interested in owning a 4-week tournament or one league; we want to try and build that whole genre.