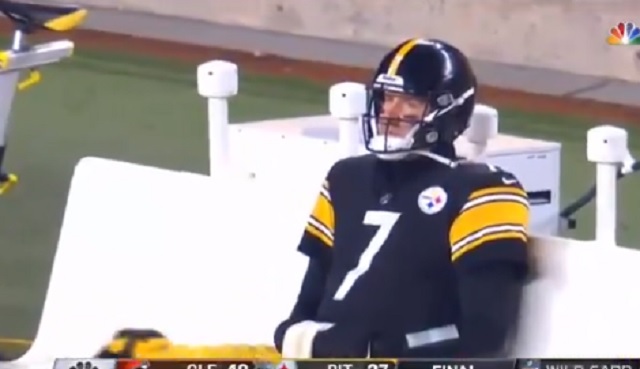 Steelers franchise QB Ben Roethlisberger wasn’t feeling too well after the team’s loss against the Browns on Sunday.

During the game, the Steelers fell behind 35-10 in the first half after Roethlisberger threw three costly interceptions.

Eventually, Roethlisberger put up some insane stats to get the Steelers back in the game but it was too little too late.

This might be the most insane stat line you will ever see pic.twitter.com/XFTKFQOeky

After the team’s loss, Roethlisberger was seen looking extremely sad on the bench while his teammates shook hands and congratulated the Browns on their win.

Browns fans called out Ben for not shaking hands with Baker after the game.

I understand Big Ben #7 is emotional after loss. Could be last game at Pittsburg..might retire.heart broken. I like Big Ben..But why did he not get off bench & meet Baker on field and shake hands? Just set on the bench never got up…curious …if he won would have shook hands

Ben Rothlesberger doesn’t shake hands at the end of the game. He is and always has been trash. 🗑

So Ben Roethlisberger doesn’t even get off the bench to shake hands or hug it out. What a douchebag!

Nice of Ben and JuJu to sit on the bench and not shake hands, F'n crybabys

Ben Roethlisberger can't even be courteous enough to congratulate the Browns on winning, he doesn't even want to shake hands. Does anyone still like Ben at this point?

@HammerNation19 @TheRealTRizzo Ben just gave so many browns fans meme material by sitting on that bench crying. U shake hands and get off the field. Fitting that the team he dominated for that many years,that never beat him in his house finally did it and ended it for him.