Picks Against The Spread For Each XFL Week 3 Matchup 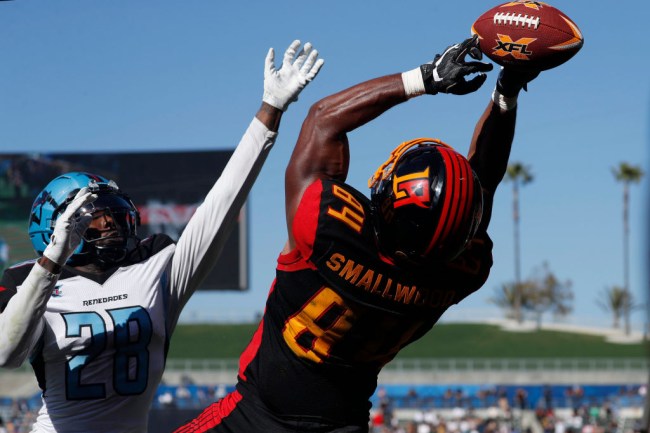 We’re heading into the third week of the XFL season and the picture is getting clearer. We’re starting to see the teams that have the best chance to compete for a championship and the ones that don’t look like they’ll be much of a competitor this year.

This could be an important week for a couple of teams. Two matchups are between teams that are 1-1, and although this is just Week 3, after this, the season will be a third of the way through.

Here are the best bets this week in the XFL.

Houston is one of two remaining undefeated teams in the league and looks impressive to start the year. They currently have the most touchdowns through the first two weeks with nine and their offense has looked great thanks to quarterback P.J. Walker, who is third in the league with 442 passing yards and can shed tackles like this.

On the flip side, Tampa Bay looks like a potential cellar dweller with how they’ve struggled so far. They’re now 0-2, the Vipers played Taylor Cornelius and Quinton Flowers last week who went for a combined 17-32 with three inceptions in replace of Aaron Murray who was inactive. This team, who has yet to score an offensive touchdown this season, would probably take Jameis Winston just getting out of Lasik surgery at this point.

This game should not be a problem for Houston.

This will be an interesting matchup between teams that lost in Week 1, but won in Week 2.

The city of Seattle certainly loves its sports. The Emerald City faithful came out and filled Centurylink Field, but it didn’t really look like a Seahawks game, so maybe we’ll call them 11 & 1/2 man. The Dragons did not have a pretty win against the Vipers last week; quarterback Brandon Silver threw for 91 yards, 68 of them coming on one play, and the other touchdown was from a 1-yard interception helping them sneak by with a 17-9 win.

Dallas saw a vast improvement in their second game. Having Landry Jones at quarterback made a huge difference as he was the first player to throw for over 300 passing yards in the league this season. Cameron Artis-Payne had an impressive game of his own with 99 rushing yards and touchdown.

Despite both of these teams winning in Week 2, Dallas looks to be the better-looking of the two. Having Jones behind center makes this team much better, while Seattle’s win last week was against probably the worst team in the league, and their Week 1 loss with three turnovers and a blocked punt was brutal.

The 9.5 point spread here is the highest of the season. Even though both of these teams have the same record and suffered losses last week, one team looked much better than the other.

New York was looking good in their first week and might have had one of the more impressive defenses in the league with a 23-3 win. However, in Week 2 they ran into the Defenders, and well….they couldn’t defend them, add quarterback Matt McGloin’s poor showing and a fourth-quarter benching, they became the first team to be shut out this season.

"There's a lot of stuff going on behind closed doors, I think we need to clean that up, communication especially is one"

Matt McGloin is trying his hardest to get traded LMAOOOOOOOO! pic.twitter.com/yuRe9CnJKA

Although St. Louis didn’t come away with a win last week, they very well could have and looked impressive. After falling 21-6 going into halftime, the Battlehawks came close to a comeback, falling just short 28-24. Jordan Ta’amu is looking like an early MVP candidate as he’s second in the passing yards with 493 and third in rushing yards with 109.

The Battlehawks should have an exciting home opener. This will be the first professional football game since the Rams left for Los Angeles and that city is a good sports town. I expect the Battlehawks to win, but this is spread is too large to be confident in.

We just so happen to have both undefeated teams playing both of the winless teams.

The Defenders have looked good in both games this season, but they were dominant in their 27-0 win over New York. Cardale Jones has looked great in his first two weeks as he leads the league in passing yards. The team has been great on both sides of the ball as they have the best touchdown ratio in the league at +4.

The Wildcats are another team that has not gotten it together in their first two games. Their offense looked slightly better in Josh Johson’s first start of the season, but the defense looks like it’s going to be their Achilles’ heel as they’ve given up a league-leading eight touchdowns so far this season.

It’s obvious that D.C. is the far superior team. Its offense has been one of the more impressive this season and L.A. looks to have trouble on defense, Jones and the Defenders have a chance to put up some of the best offensive numbers this upcoming week.