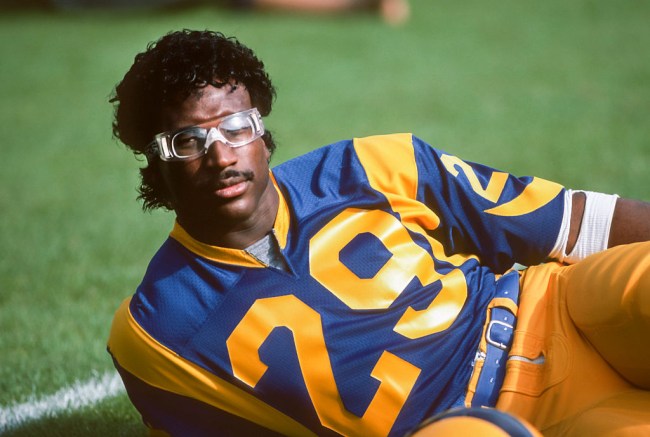 I’ve been watching a lot of NASCAR lately, primarily because it’s the only sport that has gotten everything up and running again with any sort of regularity. That isn’t to say things are back to normal, because with no fans and everyone at the track wearing masks, it’s clear we still have a while to go.

However, during a recent race, something unusual and completely unrelated to safety measures caught my eye (a pun, as you’ll soon see, could not have been more intended).

While looking at Joey Logano’s in-car camera, I noticed he was wearing what appeared to be a pair of run-of-the-mill prescription glasses beneath his helmet. This stuck with me for two reasons because A) I would have thought driving a racecar would be more of a contact lens situation and B) it was an inspiring example of an athlete with less-than-great eyesight making it work.

I grew up with lousy eyes. If I had a pair of billiard balls in my eye sockets, my vision would only be marginally worse than it is now. At a certain point, I was forced to don a pair of glasses and endure the common barrage of childhood taunts that come with them, like “four eyes” and “Look at this guy with his glasses! What do you do? Read books or something? Ha!”

Fortunately for me and other people with vision issues, there have been heroic athletes who broke barriers by wearing glasses where no glasses had been worn before (or where it’s at least fairly inconvenient).

Let’s take a look at some of the sports world’s bespectacled heroes. 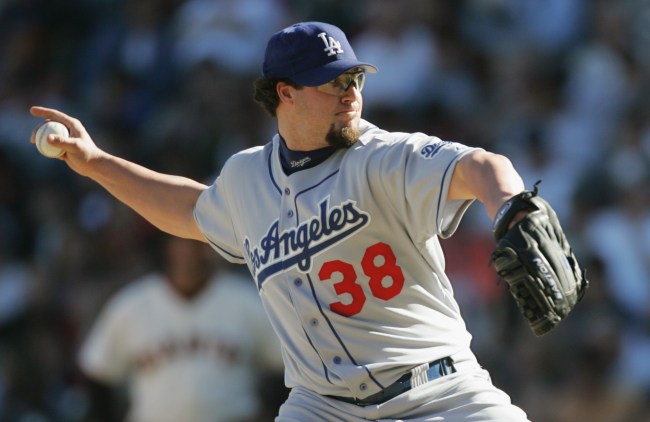 When I was playing Little League and swinging at every ball that came my way (and several other flying objects I thought were baseballs but turned out not to be), I thought my hopes of making it to The Show were dashed. Damn you, feeble eyes. Damn you!

However, proof that poor eyesight was not a baseball career death sentence would come by way of the Great White North. Enter: Eric Gagne.

Best remembered as a closer for the Los Angeles Dodgers (where he was an absolute save machine), Gagne also brought some serious specs to the mound. They looked like they’d be at home at the shooting range just as much as they did on the mound.

Imagine having to come to the plate in the ninth down by two. The entire game rests on your shoulders. You’re shaking in your cleats as it is, and now, you’re getting the stare down from those glasses. You’d swing at anything just to retreat into the clubhouse and drink a beer.

While pitching ability is probably the main reason Gagne was able to become the fastest pitcher to reach 100 saves, I like to think the glasses helped a little bit. 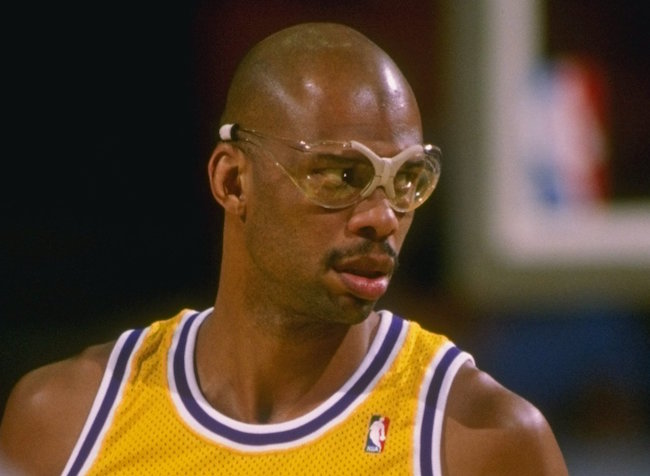 Folks, it’s important to remember that there are other eye maladies than just not seeing clearly. That’s why Kareem Abdul-Jabbar, the NBA’s all-time leading scorer, opted to throw on his iconic goggles in the first place. Due in part to his height, Kareem got poked in the eyes a lot, and back in his college days, he even missed two games with a cornea injury.

Everyone knows you can’t rack up copious amounts of points if you’re sitting on the bench or missing an eye thanks to a defender’s rogue finger. You’ve got to protect those peepers, and if that means goggles, you wear goggles.

Abdul-Jabbar was a member of the Milwaukee Bucks and the Los Angeles Lakers during his career, but y’know what? He was also a Trailblazer….for eye protection. 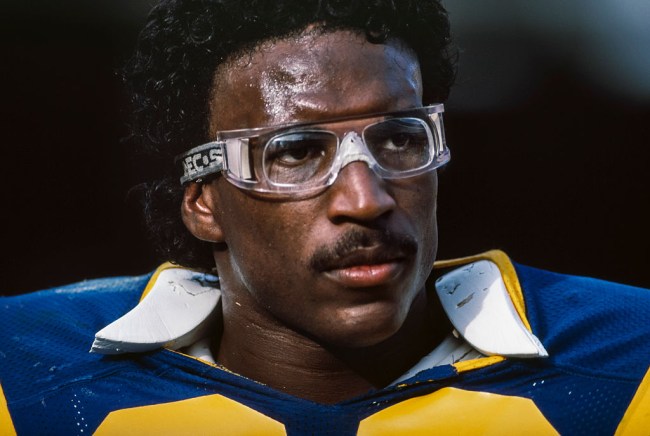 Even the gridiron has seen some glasses and (with apologies to Rodrigo Blankenship) there is perhaps no case more notable than Los Angeles Rams running back Eric Dickerson.

Dickerson sported a pair of rec specs during his time in the league, even if it was a less than desirable necessity. In a 2016 interview on the NFL Network, Dickerson was asked if his trademark frames were prescription or “all style,” to which he responded:

“I am blind as a bat. I hated them goggles. I hated wearing those goggles.

I tried to go without them a couple times. I’d go through practice and put contacts in. They worked. I’d get into the game. I said, ‘Keep my goggles on the sideline.’ First hit, contacts pop out.”

Whether he was a fan of his eyewear or not, they helped Dickerson become a Pro Football Hall of Famer, and if there was an Athletic Eyewear Hall of Fame (which I’m now realizing should be in Los Angles because that seems to be where everyone with glasses played at some point) he’d be a first-ballot inductee there too. 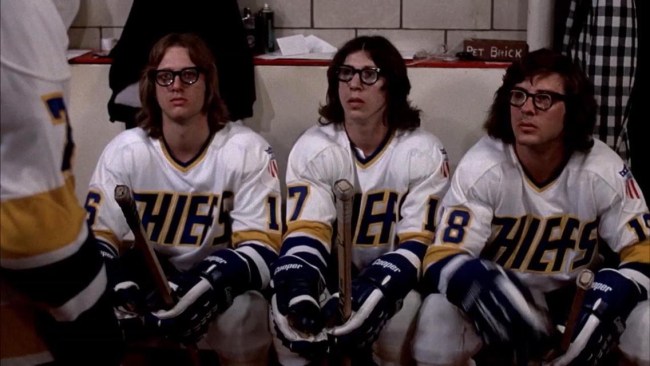 No, not those Hanson Brothers. We’re talking about another group of long-haired siblings who played together 20 years before “MMMBop” dominated the charts: Jack, Steve, and Jeff Hanson, who were scoffed at for their numerous eccentricities from the moment they arrived in Charleston, West Virginia in Slap Shot.

They were mocked for beating up a soda machine that had the audacity to take their quarter, playing slot cars in their hotel room on a road trip, and, of course, for all wearing thick-rimmed, Buddy Holly-esque glasses.

But the second the three got the nod from Chiefs player-coach Reggie Dunlop in a game against the Broome County Blades, the trio took the entire Federal League by storm, dismantling the opposition and even squaring up against the likes of Tim “Dr. Hook” McCracken and the fearsome Ogie Oglethorpe.

The Hansons are some of the greatest inspirations in the history of corrective athletic optometry. It could be even be argued by some that their presence helped to keep the Chiefs from relocating to Florida.

The Hanson Brothers: absolute legends of both the rink and the optometrist’s office.