BetMGM Deal Alert: Bet $1 To Win $100 In Free Bets If ANY Team Scores A TD In NFL Playoffs During Championship Sunday 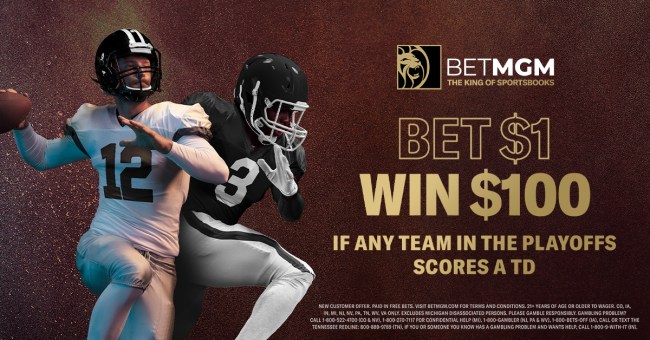 Presented in partnership with BetMGM…

The NFL Playoffs enter the conference championship round, meaning that, by Sunday night, we’ll know the two teams facing off in Super Bowl 55. While the two games on the NFL schedule are quite the tasty matchups — pitting Aaron Rodgers vs. Tom Brady in the NFC Championship, and the defending Super Bowl champion Chiefs against an upstart Bills team in the AFC Championship — for all of you into sports betting, BetMGM has something that’s sure to make each game even more epic while watching.

That’s because BetMGM’s giving away $100 in FREE bets on a $1 bet should any team score a touchdown. Uh, is it just me, or is this is absurd? Like, there’s never been easier money to win. Participants must be present in Colorado, Indiana, New Jersey, Tennessee or West Virginia.

For those eligible, sign up on BetMGM. All bets must physically be made in Colorado, Indiana, New Jersey, Tennessee or West Virginia, but players can register and deposit cash from anywhere — so go ahead and drop your dollar in to win a cool hundo before the conference championship games kick-off. There’s bound to be a touchdown scored in either game, so it’s a no-brainer to get in on this wild betting deal from BetMGM.

No one ever said that winning money from sports gambling would be easy, but BetMGM sure makes it seem like it is. So don’t miss out on the chance to win $100 in FREE bets on a $1 gamble during this weekend’s NFL Playoff games, because it’s nearly as simple as breathing. Let’s go!