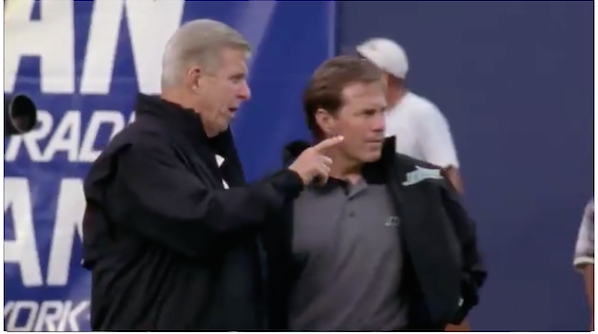 Bill Belichick has 7 Super Bowl rings (5 as HC) and is revered as the most successful coach in league history, but doesn’t do personal endorsement deals; his “evil genius” image has been cultivated not to sell products, but to reduce off-field obligations. The New York Times best-selling biography, “Belichick” touches on “Human Bill”, offering anecdotes meant to explain why the football coach opts to display a persona harmful to his financial interests. JohnWallStreet had the chance to speak with the author of the book, Ian O’Connor, to get his insight on Bill Belichick, Inc.; the company Bill formed and then shuttered before his first public speaking appearance (or product pitch).

JWS: When Agassi said, “image is everything”, he meant in terms of selling products, but B.B. has cultivated this enigmatic persona to avoid off-field responsibilities. Can you help explain the logic?

Ian: It’s a good question because his net worth is +/- $35 million (Forbes) and that seems awfully low for the leading character in the most watched TV drama, 17 out of every 20 times. He’s the most prominent figure in the NFL, which is the most prominent show on television. Just in terms of endorsements, he has left tens of millions of dollars on the table; money that comes with the credibility he’s established for sustained winning over a 20-year period.

I really believe part of the reason he hasn’t capitalized is his belief that everything in the organization is team centric, his whole program is built around team over self and if he were to capitalize on his fame outside of football, I think he would feel that he’s elevating himself above the team.

The other thing is, he’s always saying it’s a players’ game. I think he really means that. Had he gone ahead and really capitalized on his earning power through endorsements and corporate speaking, I think he believes that he would be in defiance of the values he preaches.

JWS: At one point, B.B. started a for-profit company (Bill Belichick Inc.) to field consulting, public speaking and product endorsement opportunities. It’s your belief Bill would make an effective pitchman. Why is that?

Ian: I did a book on the rivalry between Arnold Palmer and Jack Nicklaus, and Arnold Palmer is really the Founding Father athlete as a pitchman. He started IMG on a handshake with Mark McCormack. McCormack was succeeded by a guy named Alastair Johnston and I remember him explaining to me that the strategy with Arnie was to avoid selling him as a winner, because his window to win was going to be short. They didn’t really want trophies in his hands because that was going to end shortly and they wanted to sell Palmer to America as a successful person people could relate to. With Belichick, you get to actually sell winning because he’s won over such a long period of time.

JWS: There were times last offseason when Tom Brady offered more loyalty to his TB12 brand than to the Patriots. It had been estimated that upwards of 2/3 of Patriots players had been using Alex Guerrero (Brady’s personal trainer) and TB12 methodology, which upset Belichick. Is Tom all in with TB12 because he genuinely believes in this holistic approach or because this is a business for him?

Ian: I think it’s both really. There’s an anecdote in the book referencing how, you can say what you want about Alex Guerrero (i.e. his “shady” past), but he knows how to manipulate the body. I mean, the league’s best QB is on the field every Sunday, whereas former NE backup and current SF starter Jimmy Garoppolo has already been hurt twice. I think Brady fully believes Alex Guerrero is the reason why and believes in the product.

Howie Long-Short: As a Jets fan, I regularly find the need to point out that prior to Bob Kraft’s acquisition of the team in ‘94, the New England Patriots were the NFL’s least valuable franchise (purchased for $175 million); today the club is worth $3.8 billion (Forbes). I asked Ian how much of that increase could be attributed directly to the team’s success under Bill Belichick?

Ian: Of course, a lot of that is TV money, but if you took away all the Super Bowls and all the success, the franchise is worth in the neighborhood of $2.6 billion; that’s what the franchises with the 15th, 16th, 17th highest valuations are worth. They’d be a mediocre franchise under Kraft without Brady and Belichick. So, you can argue Bill and Tom have increased the club’s valuation by $1.2 billion.

Fan Marino: Speaking of the Patriots, Sunday night’s shootout win against Kansas City was the highest rated (14.6) SNF game since Week 1 of ’17. The game experienced a 34% YoY increase over the Week 6 of the ’17 season. 5 of the league’s 6 timeslots were even or up YoY in Week 6. Ratings are +3% across the board in ’18.

The sports-centric OTT streaming service DAZN has inked unified middleweight world champion Saul “Canelo” Alvarez to a 5-year 11 fight pact, worth $365 million; the most lucrative contract ever issued to a professional athlete. Alvarez can reportedly earn additional money should DAZN reach subscription benchmarks during the life of the deal. In addition to the Alvarez deal, it was announced DAZN would live stream up to 10 “high-caliber” Golden Boy Productions fight nights, per year, beginning in ’19.

Howie Long-Short: DAZN is part of the recently rebranded DAZN Group, a subsidiary of privately held Access Industries (also owns Warner Music). The sports media company also counts The Sporting News and Goal among its U.S. publications. DAZN Group’s recent decision to spit those 3 assets (and Spox.com) off from their betting-related content and data business has many believing the gambling content and data business is up for sale. Founder Simon Denyer’s comments about his desire to focus the company’s “efforts around our primary growth engine” (see: DAZN), did little to change those beliefs.

While you can’t invest in DAZN Group, there is one way to play DAZN; via investor Dentsu, a Japanese advertising firm that trades publicly on the Tokyo Stock Exchange under the symbol (TYO: 4324).

Fan Marino: September’s Alvarez/GGG fight sold for $84.99, so Alvarez fans will appreciate DAZN’s $9.99 mo. “all you can watch” offering. Alvarez acknowledged it was important for him to be able to give fans the opportunity to see him fight without having to pay “$70 or $80” on PPV.

Alvarez’s first fight on DAZN will be December 15th against Rocky Fielding. The last time out, Alvarez won a majority decision against Gennady Golovkin. While Alvarez is moving up in weight and trying to sell this as “a dangerous fight”, he’s too skilled for Fielding. Apparently, I’m not the only one who feels that way; Mike Coppinger (Ring Magazine) reported one industry source told him, “just watched highlights of Rocky Fielding, he’s pathetic. Canelo will probably knock him out in the first round.”

Alvarez is saving his fans a few bucks (even if they never watch anything else), but it’s unclear how much (if any) he might be leaving on the table by signing a long-term deal. While he earned +/- $50 million for his fight with GGG (after PPV bonuses), opponents like Fielding wouldn’t allow him to draw that kind of pay day and I’m not sure there are 9 other potential opponents (assumes GGG trilogy fight) that would; though, DAZN does have steer in terms of which opponents are “accepted” for Canelo.

That’s not to say this isn’t a great deal for DAZN. They now have the 2 most marketable fighters in the world (see: Anthony Joshua) fighting on their platform and can guarantee at least 4 tent-pole cards/year, which makes their $9.99/mo. subscription fee a no-brainer for fight fans.