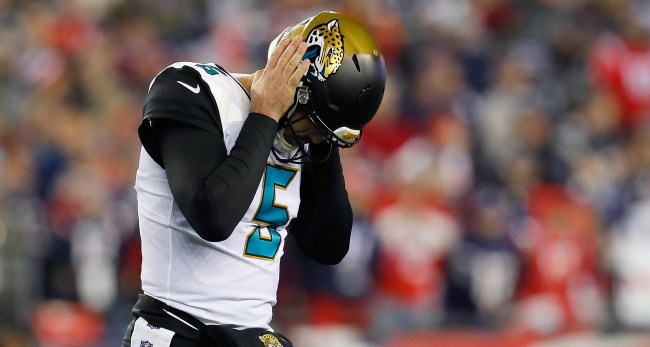 Jaguars quarterback (at least for now) Blake Bortles just put his beachfront Jacksonville, Florida home on the market. Does he know something we don’t? (But can probably guess.)

According to the Jaguars’ front office in a statement to First Coast News, Bortles selling his home has nothing (Nothing, we tell you!) to do with him being shipped off to another team.

“Blake’s moved to a new residence in Jacksonville after spending the last few years at the beach. He remains under contract with the Jaguars,” the statement read. “Coach Marrone addressed today how Blake has been in the facility working out on an almost daily basis and has handled all of the scrutiny incredibly well.”

However, John Clayton says (yes, that John Clayton) Bortles will not be on the Jaguars’ roster next season and instead the Jags should focus on signing Nick Foles.

For his part, Bortles’ real estate agent Justin Dalrymple claims, “A beach property doesn’t really lend to the kind of privacy Blake was hoping for. So he’s put the house up on the market and is looking for something more private.”

Regardless of who is telling the truth, Bortles is selling his 2,503-square-foot beachfront home in Jacksonville Beach, Florida for the low, low price of just $2 million.

Check out everything you get for your investment, according to the home’s listing on Realtor.com (cleaned up for grammar and punctuation)…

As you enter the home you can’t help but notice the direct ocean views from the plethora of windows that line the back of the house. The foyer features a one of a kind temperature controlled wine cellar that then leads into the expansive gourmet kitchen and living room.

The kitchen showcases dark wood cabinets with exotic stone countertops. In true chef style, you have two sinks including a smaller vegetable sink in the huge center island. The kitchen opens up to the living room and dining area which allows for the perfect entertaining space.

Not only do you have incredible interior living space you also have a large covered porch overlooking the ocean. Up just a few steps is your first full bathroom and bedroom along with the laundry room. On the third floor is your other guest bedroom with Murphy bed and additional full bathroom. Down the hall and with unobstructed views of the ocean is the expansive master bedroom with sitting room and massive en suite bathroom. Enjoy your private covered balcony with sweeping views of the ocean off the master suite.

Interested? According to Realtor.com’s payment calculator it can be all yours for around $10,617 a month in mortgage payments, after a $400,000 down payment, of course.

Photos: Take a look inside the Marsh Landing home of Blake Bortles https://t.co/ARL017ezSJ