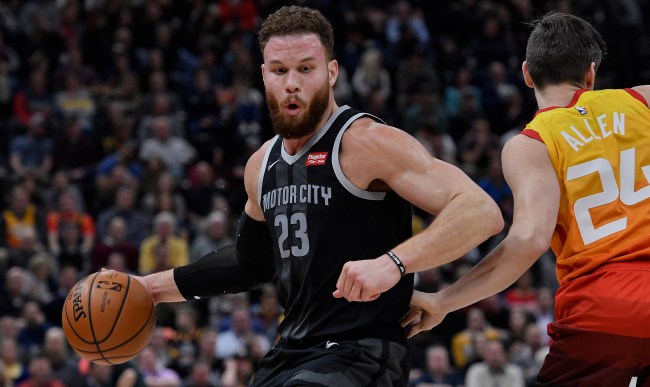 Amazingly, Blake Griffin, who is in the midst of his 10th season in the NBA (he missed his entire first season with an injury), turns just 30-years-old in March. And while his name is still synonymous to many with the Los Angeles Clippers, he has been a Piston since being traded to Detroit on January 29, 2018 – the team he’s now signed to play for until the 2021-22 season.

Which is probably why Griffin is looking to sell his 9,572-square-foot mansion in Pacific Palisades. That and the fact that he is also looking to cash in by asking for $10.995 million, or about $2 million more than what he paid for the property back in 2014.

Not that the mansion isn’t worth it. It’s more like a palace than a house. That is apparent from just walking through the front door and entering a 24-foot-tall foyer with a curved floating staircase and chandelier.

Once inside, spread out over three floors, are six bedrooms including an en suite guest bedroom, six-and-a-half bathrooms, formal living and dining rooms, a family room with a fireplace, an office, a cook’s kitchen with a six-seat island, a family/game room, gym, and a home theater with a 130-inch screen.

The master suite has a sitting area, vaulted ceiling, private fireplace and balcony, a bathroom with a large tub and marble-lined steam shower, and two room-size fitted closets.

Outside you get entertaining patios, a basketball half-court, a saltwater swimming pool, spa, and an outdoor kitchen.

Interested? Who wouldn’t be? If you can afford around $58,812 a month in mortgage payments, with a $2.199 million down payment, according to the listing on Realtor.com, this place can be all yours. Anyone want to go halfsies?