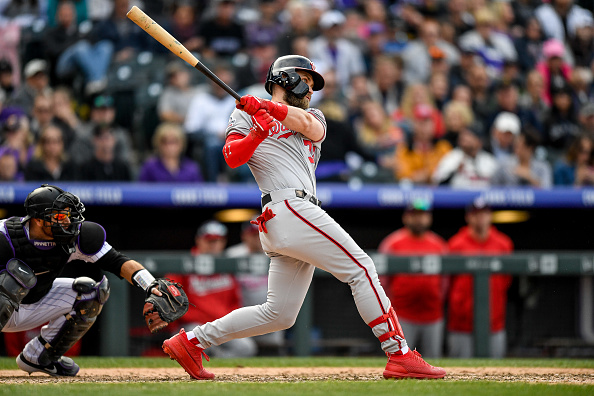 Bryce Harper is a free agent and his agent, Scott Boras, told reporters at this week’s GM meetings that the “generational player” deserves a contract valued between $400 million and $500 million; the baseball super-agent defined a “generational player” as one entering F.A. at a young age (Harper turned 26 in Oct.), one who has demonstrated “elite performance” during the early stage of his career (see: in the last 16 seasons, only Bonds and Pujols had seasons with a higher OPS than Harper did during his ’15 NL MVP season) and one with “iconic value” (see: the potential to impact a franchise’s valuation, gate attendance and television ratings).

Boras made his case by asserting that the value of the Nationals franchise had increased by “more than 4x”, that attendance at Nationals Park had grown by “600,000” fans/season and that the team’s TV ratings had “tripled”, since Harper first joined the club in ‘12. In late September (word just leaked this week), Harper rejected a 10-year +/- $300 million proposed extension with the Nationals, a move that effectively ended his time in Washington; the Phillies are now believed to be the front-runners to land the star outfielder’s services.

Howie Long-Short: A quick fact check on Boras’ boasts indicate he had been exaggerating on claims related to both team valuation and TV viewership (attendance was correct, rose from 1.9 million in ’11 to 2.5 million in ’18). In March ’12, before Harper ever took a MLB at-bat, Forbes pegged the Nationals value at $480 million; it’s worth $1.675 million today. We can debate how much of an impact Harper had on the club’s rising valuation (the league average rose from $605 million to $1.645 billion during that time), but the team is now worth under 3.5x (3.489x) what it was 6 years ago, not more than 4x.

We found similar inconsistencies with Boras’ claim that TV ratings had tripled. In ’11, Nats games averaged a 1.44 household rating in the Washington D.C. market. While ratings have increased (averaged 2.52 in ’18), the Nationals never averaged close to a 4.2 rating; heck, the Yankees (with Stanton and Judge) didn’t even post a 4.2 rating in ’18 (3.91).

Giancarlo Stanton is currently MLB’s highest paid player, but Boras said it’s worthless to compare his 13-year, $325 million deal with the one Harper seeks (and he has a point). When Stanton signed his deal in ‘14, he was under contract for another 2 seasons (i.e. he could only negotiate with Miami); Harper can negotiate with all 30 MLB clubs.

Harper may not be the league’s only player to sign a deal surpassing Stanton this offseason though, Manny Machado could also sign a contract worth $300 million+. It’s known that Machado wants to play in NY, but the NY Post is reporting the former Orioles/Dodgers slugger is not among the Yankees top priorities and the Mets aren’t considered a realistic landing spot.

Fan Marino: Harper is amongst the league’s most marketable players and Home Run Derby (during ’18 All-Star weekend in Washington) became a Bryce Harper showcase, so I was surprised to see he only finished 13th in Majestic MLB jersey sales this season. Sure, 6 years in the same uniform (i.e. no new design, same team) will depress sales, but he finished behind Jose Altuve (2nd, ’11), Clayton Kershaw (4th,’08), Anthony Rizzo (6th, ’12), Yadier Molina (10th, ’04), Mike Trout (11th, ’11) and Buster Posey (12th, ’10); all guys who have played for their respective teams longer. Aaron Judge topped the list.