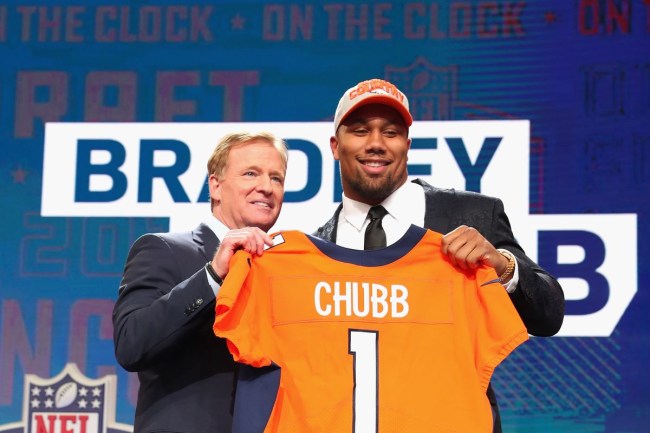 Bradley Chubb Discusses the Value of His Name & Likeness

Panini America is the exclusive trading card partner of the NFL and NFLPA. Denver Broncos 1st round selection Bradley Chubb (#5 overall) was in Los Angeles on Thursday afternoon, at the NFLPA Rookie Premier and found some time to talk with JohnWallStreet about the value of his name and likeness and the marketing deals he’s signed since turning pro.

JWS: Panini digital trading cards enable players to capitalize on draft night excitement. Did having near-instant access to shareable team branded content help you build your social media following in the minutes/hours after the Commissioner called your name?

Bradley: It did, it built it up a lot for me. It helped me build my brand and helped people to see who I was. When the Broncos made the pick, I know everybody wanted to see the card. I feel like when they (Panini) pushed that out, it helped me out a lot; I got like 50,000 followers.

JWS: You signed a shoe and apparel contract with Adidas. Basketball players tend to begin relationships with sneaker companies on the AAU level. When did you first begin to use Adidas products?

Bradley: I used Adidas all throughout college. NC State was an Adidas school, so that’s when I really started using the brand and fell in love with it. In high school, I had teammates that would wear Adidas but I always had Nike because I got cleats from my brother. He was at Wake Forest (Nike school) and was giving me his extra cleats.

JWS: Baker Mayfield suggested that if you added up all the marketing deals he’s signed since turning pro, that they would be worth $1 million – $2 million. Does the consensus (minus Cleveland) top defensive player in the draft command similar numbers?

Bradley: No, he’s a quarterback (and Heisman winner) – it definitely goes up for him. As a defensive guy, I made a good amount of money; but, I don’t think it was in the millions or anything like that.

Editor Note: It’s worth pointing out that in addition to Bradley’s Panini America and Adidas (ADDYY) deals, he’s done marketing deals with both Bose and Old Spice (PG).

Howie Long-Short: As a consensus Top 5 pick, Bradley could have hired a contract attorney, negotiated his own rookie contract and saved himself at least 1% (as much as 3%) in agent fees. Chubb said he never considered doing that, explaining he was “more comfortable” going with his brother’s agent; Erik Burkhardt of Select Sports Group. I would have advised against it (see: rookie scale), but Bradley shouldn’t have any financial issues; he’s going to a rookie deal with a total contract value +/- $27.5 million.

Fan Marino: Panini’s trading card index (released quarterly) ranks the top-performing football players in the licensed trading card industry, on factors ranging from secondary-market transactions to collectability based on rookie hype and collector speculation. The newest ranking, released on May 16th, has Chubb as the 11th ranked rookie (top 10 were offensive players); behind 2nd round pick Nick Chubb (his cousin, Browns) and 3rd round pick Mason Rudolph (Steelers). I asked Bradley, if he were to win NFL defensive rookie of the year, how high does he think he could reach on the list?

Bradley: “Pretty high. It just depends on if I go out there and handle business. I mean, it’s good to say all this stuff before the season – if I just go out there and focus on what is important, all the stuff like this (the accolades) will come later.”

Bradley: Definitely, John Elway. I met him at the combine and I was star struck.

Looking for Chubb’s rookie card? You can get Panini’s NFL trading card products online at iCollectPanini.com, hobby shops nationwide and retailers including Walmart and Target.