Big Bet Recap: Browns Bettor Lost $506K In Atlantic City While Two Others Bettors Won Over $10K On The Cowboys 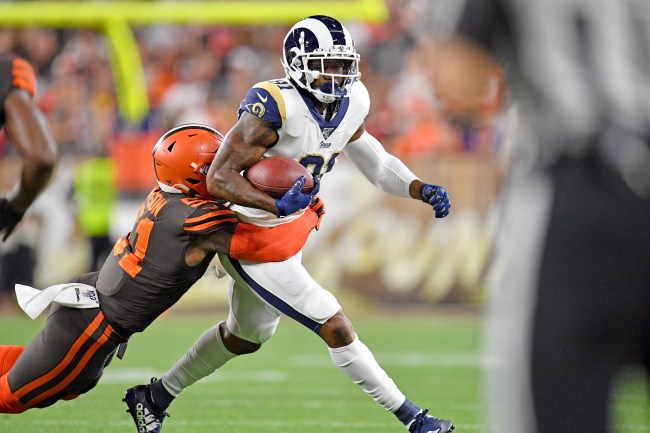 Week 3 of the 2019 NFL season is almost in the books with only the Bears and Redskins left to play on Monday Night Football. I’ve pulled together some of the biggest betting wins and losses from the past weekend (below) for you bros to check out and see where all the action was at the sports books.

Some of the interesting storylines from this past weekend are the Buccaneers losing to the Giants on a missed field goal with 3-seconds left after head coach Bruce Arians took a ‘Delay of Game’ penalty to move the team back because he said his kicker is better from the longer distance…He missed that kick. The Lions won a road game and are 2-0-1 on the season which is unprecedented for Detroits fans. The Patriots, Chiefs, Packers, Bills, Rams, and the 49ers are all undefeated through three games.

In the betting world, a gambler wagered over half-of-a-million dollars on the Cleveland Browns (at home) on Sunday Night Football against the Rams. The Rams were 4.5-point favorites on the road and they covered the spread + won the game.

The Browns lost 20-13 and that gambler is out more money than most people make in a decade, according to the gambling recap on the Action Network:

The Rams ended up winning, 20-13, and covering as 4.5-point road favorites, surviving a last-minute drive by Baker Mayfield and the Browns. The result was a full-blown disaster for many sportsbooks, as we heard all week long that this would be the biggest decision of the season so far — and the books needed the Browns to cover.

How big was the Rams support? Well, consider that William Hill came out on the right side of a $506,000 wager on the Browns to cover and still took a beating in the game.

“Even with the big fluke bet we took, this result was still horrible for us,” Nick Bogdanovich, the director of trading at William Hill, said. “This game was a massive handle and we took all Rams from -2.5 to -4. And almost everything we took live was on the Rams.”

The $506,000 bet came in at a William Hill book at the Ocean Casino Resort in Atlantic City. It was easily the biggest wager we’ve heard about this season.
“It was a relatively easy decision to take the bet,” Bogdanovich noted. “The guy is a regular customer with us.” (via)

13 minutes to go…and the biggest bet of the season hangs in the balance. A $500,000 bet on the Browns getting 3.5 points…The Browns are down by FOUR.

William Hill won a $500,000 bet on the Browns (+3.5), so they must have been the one sportsbook that evaded Rams losses? Nope. There was so much money on the Rams they actually still lost! https://t.co/Fz8UO7igbT

Imagine being the guy who bet HALF A MILLION DOLLARS on the Cleveland Browns.

Sure, this team is supposed to be a different Cleveland than the one we’ve seen in the past few decades but MY GOD, how do you bring yourself to wager $506,000 on a team that hasn’t proven themselves yet. This is one of those bets where you look in the rearview mirror and ask ‘what the fuuuuuuck was I thinking?!?’ while I’m sure the action seemed great at the time.

It wasn’t all losses this weekend. Two bettors made $10K or more on the Cowboys and another hit it big on the New York Jets:

The biggest win of the weekend was a Packers-49ers Moneyline Parly at PointsBet where the gambler took home $299,910 after the Packers won 27-16 and 4934s won in a final minute touchdown.

As for that Sunday Night Football game where the bettor lost $506K on the Browns, going into that bet, 92% of the money wagered at William Hill was on the Rams so that dude really came out of left field and changed the action. He also made the loss a little more tolerable for the sportsbook who I’m sure was more than happy to take his money.

For more of the week’s top action at the sportsbooks you can click here to head over to Rovell’s recap on the Action Network.