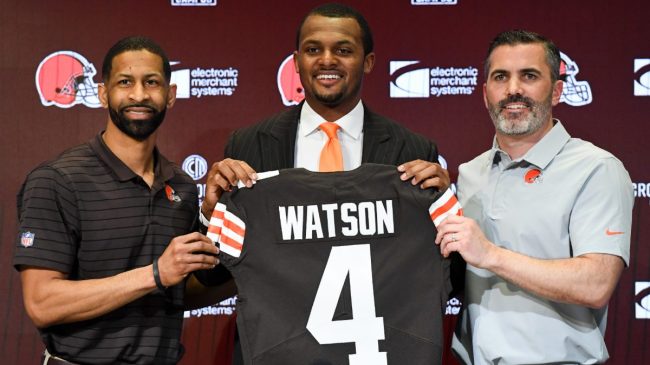 The NFL schedule is officially out, meaning fans and teams can evaluate their competition for the 2022 season.

Some teams obviously have an easier path than others (looking at you, NFC East), which sportsbooks will take into account when setting the NFL odds for the upcoming slate.

Win totals and Super Bowl chances are already being posted, with the Bills and Bucs leading the way. Division races are being posted, too, and one team in particular could read these preseason odds as a positive moving forward.

In both DraftKings and Bovada’s preseason projections, the Cleveland Browns are the favorites to win the AFC North. Keep in mind that this is the division that boasts both the reigning AFC champs in Cincinnati and Lamar Jackson and the Baltimore Ravens.

There’s no doubt that Cleveland has the roster to win the race. The offense possesses one of the league’s top rushers in Nick Chubb and the defense should return a heavy pass rush with Myles Garrett and Jadeveon Clowney.

The one key will be quarterback play, which these odds suggest will be a strong suit for the Browns next year.

Browns’ odds suggest that Deshaun Watson will play in 2022

Many are already speculating that Watson will play in the 2022 season, and these NFL odds seem to support that theory. Considering the quarterback talent that’s in the division, it’s almost shocking to see the Browns at the top of this list with uncertainty still surrounding Watson.

If these predictions ring true, it means Cleveland will have defeated the likes of Joe Burrow and Lamar Jackson to land a first-place finish. They’ll almost certainly need Watson for that to happen.