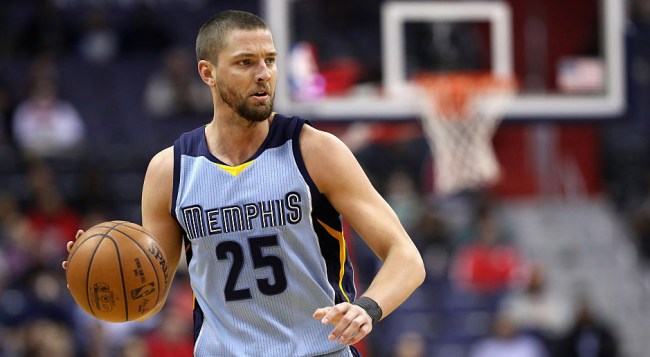 In 2016, as every Grizzles fan is well aware, Chandler Parsons signed a 4-year deal with Memphis worth $94 million.

Also, as every Chandler Parsons fan is aware, he and his girlfriend, model Cassie Amato, recently broke up.

Which makes it more than a little surprising that Parsons is looking to sell his absolutely sick Bel Air bachelor pad.

This place is pure baller with a price tag to match: $13.5 million.

According to the home’s listing on Realtor.com, it’s 11,864-square feet with six bedrooms and nine bathrooms, a grand double staircase in the entryway, an open concept living room, five fireplaces, a chef’s kitchen, a dining room and bar with walls of sliding glass doors, a wine cellar, and a home theater.

Upstairs are all six bedrooms, including the large master suite with vaulted ceilings, a large balcony, a spa-like bath, and an expansive walk-in closet. The backyard is totally private with a covered patio, a zero-edge pool and spa with LED lighting, an outdoor kitchen, a basketball half court, and numerous seating areas.

Parsons snagged the home in 2017 for $10.9 million, but now it can be all yours for somewhere in the neighborhood of $70,232 a month in mortgage payments, with a small $2.7 million down payment, of course.

You can't get hurt flipping houses.https://t.co/cFRfYFPbnt

Anyone want to go halfsies?