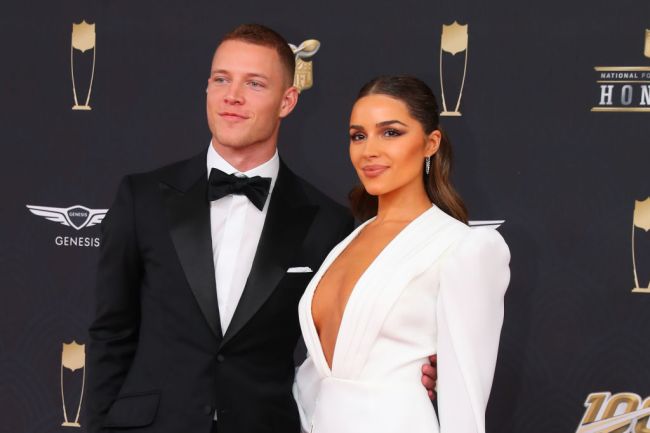 Christian McCaffrey and his model girlfriend Olivia Culpo reportedly purchased a beautiful lakefront castle, dubbed “Grand Lac Chateau.” McCaffrey, who is the highest-paid running back in the NFL and has a net worth of $10 million, and his girlfriend who has a net worth of $7 million, allegedly purchased an 8.5-acre property in the Charlotte area.

McCaffrey and Culpo reportedly purchased an 11,595-square-foot mansion that was built in 2018, which features six bedrooms, seven bathrooms, and four garages.

After becoming the highest paid RB in the NFL this offseason, Christian McCaffrey has bought himself a new $7.5M home.

It's the largest residential real estate transaction in the areas history. pic.twitter.com/XPm4ECo4G3

The property will cater to McCaffrey, who is a huge Bruce Lee fan. Allegedly, one of McCaffrey’s favorite quotes is “Be Water.” The new property is on the shore of Lake Norman and features a 70,000-gallon pool with a 60-foot infinity edge.

“It has a lot to do with fluidity and being able to adapt,” McCaffrey told USA Today in 2018. “I think when you’re running through a hole and you’re hit in certain, different ways, you have to be able to move and change and make people miss. You’ve got to be able to adapt to your environment. It all relates.”

The house, which Zillow says was listed for sale on September 4, was officially sold on October 1 for $7.5 million — a 6.2% discount from what the house was listed at — though HM Properties managing broker Josh Tucker says that the deal went down within days. He told Brianna Crane of the Charlotte Agenda that Victoria Speer, a real estate agent of Coldwell Banker Realty, contacted him with “a client ready with an all-cash offer.”

Culpo, who is Miss Universe 2012, was seen at the castle mansion in Instagram photos.

Watched the @louisvuitton virtual show, started decorating for fall, went to targét (I was walking around the store like that for a good 20 min 👍😂)

In April, McCaffrey signed a new $64 million contract extension. The contract made McCaffrey the highest-paid running back in NFL history.

It’s good to be Christian McCaffrey.