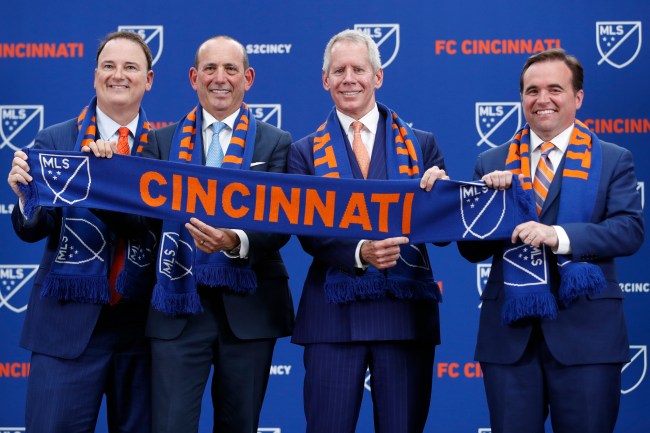 Major League Soccer has introduced Cincinnati as the league’s 26th franchise, with FC Cincinnati (formerly of the USL) set join North America’s top-flight soccer league next season (’19). The team will continue to play at the University of Cincinnati’s Nippert Stadium until a “world class soccer stadium” is ready in ‘21. Nashville (awarded team in December ‘17) and Miami (awarded team in January ‘18) will play their expansion seasons in 2020. MLS plans has plans for two more expansion franchises. Detroit and Sacramento are among the cities expected to receive consideration.

There’s been no indication that Goldman Sachs (GS) is loaning money to the Linder group, but no financial institution has been more bullish on the North American soccer league than the NY headquartered investment bank. GS has lent league teams upwards of $500 million (LAFC – $180 million, Orlando City – $120 million, D.C. United – $100 million) to build four new stadiums (the 4th team is undisclosed) within the last year. Global head of sports finance Greg Carey cited the overwhelming success of Atlanta’s expansion franchise, league-wide sponsorship deals (see: Adidas), strong local ownership groups (think: Kraft in New England), the league’s target demographic (see: millennials) and a projected rise in media rights fees (current deal expires in ’23) as reasons the investment bank is “willing to commit a significant amount of money to the league and the teams.”

As for Goldman Sachs (GS), the company posted their highest equities trading revenue in 3 years in Q1 ’18 (+38% over trailing quarter to $2.31 billion). Higher fees, market volatility and increased client activity were credited for driving the sharp rise in results. Investing and lending revenue (+43% to $2.09 billion) and underwriting revenue (+27% to $1.21 billion) also contributed to the top and bottom line earnings beat. Shares hit a 5-year high back in March ($275.31) but have steadily declined since; they closed Wednesday at $232.23.

MLS expansion fees are rising +/- $10 million each year. Toronto paid $10 million in 2006. By the time that Portland and Vancouver joined the league in 2012, the league was asking for $40 million/franchise. Minnesota paid a $100 million expansion fee 5 years later (2017) and LAFC was charged an additional $10 million to join the league this year. Cincinnati will pay $150 million.

Fan Marino: Despite all the positives Greg Carey cited, it’s important to point out that MLS continues to face both viewership and attendance struggles; television ratings are flat (+/- 250,000 viewers/game) and attendance is down 6.5% YoY (to 20,683, 86.32% capacity) in 2018. The addition of Cincinnati should help boost league attendance figures, though. The club drew 21,000+ fans/game in 16 home games last season and is averaging nearly 24,000 fans/game this season, more than all but five MLS clubs.

SportsBusiness Journal is reporting that Fiserv has agreed to pay $120 million over 20 years for the naming rights to the Milwaukee Bucks’ new downtown stadium, despite VP of Corporate Communications Britt Zarling defiantly saying “we are not the naming rights sponsor.” The Bucks had initially passed on the offer, seeking between $7 million – $10 million annually, but chose to reconsider after no other serious bids arose. It’s unclear what the 17,500-seat building – currently referred to as the Wisconsin Entertainment and Sports Center – will be called; Fiserv Arena and Fiserv Center are both under consideration.

Howie Long-Short: When we spoke to Bucks President Peter Feigin back in late March, he said the team wanted a sponsor that would be able to expand its international footprint. Fiserv has more than 12,000 clients in 80 countries, so the team accomplished its goal on that front.

As for Fiserv, the company is a component of the S&P 500 (and NASDAQ 100) and trades under the symbol FISV. FISV posted “solid financial results” (adjusted EPS +23% YoY to $.76) in Q1 ’18. Sales increased 12% YoY and the company generated $470 million in proceeds from the sale of two businesses (55% of Lending Solutions business, MyVoucherCodes). The company also returned $398 million to shareholders in the form of share repurchases during the most recent quarter. FISV shares are up 21.5% over the last 12 months, closing at $76.06 on Wednesday.

Fan Marino: BMO Harris is believed to be paying roughly $1 million annually for the naming rights to Milwaukee’s existing building, so the new naming rights deal should add +/- $5 million annually to the team’s bottom line. Their new local television pact (with Fox Sports Wisconsin) – worth more than $200 million over 7 years – will also boost team coffers. The expiring contract paid the team +/- $20 million this past season. The new deal starts at $26 million in 2018-2019, rises 4% annually and averages nearly $30 million/year. It must be noted that in 2017-2018 the Bucks posted their highest local TV ratings in 12 years.