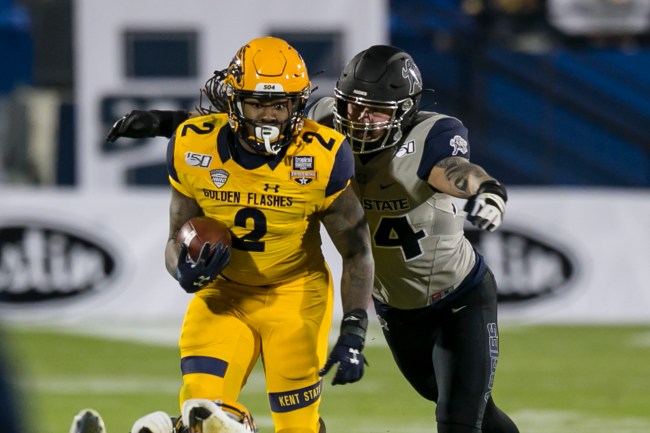 The most wonderful time of the year has arrived for college football fans. In a year that cast doubt over any semblance of a season, all but a handful of games have been played with minimal hiccups across various conferences and this week marks the largest slate of games to be played this season. As the MAC gets up and running, the schedule provides a Wednesday night triple header this evening to get the juices pumping. For all of you sports bettors, I’m here to help lead you down a winning path of money-making.

If you live in a legal state, we’re here to provide you with an incredible deal through our partners at BetMGM. New players can register their accounts with BetMGM and use the code BROBIBLE to receive a 100% deposit match up to $500. That’s right, for every dollar you deposit up to $500, BetMGM will double it.

Once you’re signed up through BetMGM, hop on the Sportsbook and follow our picks for what is set up to be a wild evening of Group of Five football.

Why Eastern Michigan will win:

The Eagles finished 6-6 last season and earned their second-straight bowl appearance. However, with the success, offensive coordinator Aaron Keen left for a head coaching job in Division II football. As a result, head coach Chris Creighton will take over the play-calling duties for Eastern Michigan. He will have a good core duo of playmakers to throw the ball to, including third-team all-MAC wide receiver Dylan Drummond and Mackey Award watch list tight end Thomas Odukya.

Odukya stands 6-foot-6 and will need to be the team’s top offensive producer for EMU to have any success in 2020. It is unclear who will be throwing him the ball, as the Eagles will have to replace second-team all-MAC senior quarterback Mike Glass, but it seems as though Preston Hutchinson will get the nod under center. He saw time in eight games a season ago and completed 31-of-36 passes for 357 yards and four touchdowns in a win over Western Michigan. He will need to get the air attack going early and often, because the defense will be without four of its top six tacklers from 2019, so out-scoring opponents will be crucial.

Why Kent State will win:

On the other end of the spectrum, the Golden Flashes return one of the conference and nation’s best quarterbacks from 2020. Dustin Crum led Kent State to dominant conference wins in its final four games of last season and capped it off with a bowl win over Jordan Love and Utah State.

The 6-foot-3 dual-threat gunslinger threw for 2,622 yards with 20 touchdowns and two interceptions as the starter and added 707 yards and six touchdowns on the ground. If the offensive line can improve upon the 38 sacks it allowed in Crum’s 11 games last season, it will open up opportunity for him to stand tall in the pocket and find his targets. The Big Uglies return 3 of five starters and should continue to pave the way for a Kent State run game that averaged 186.7 yards per game in 2019.

On defense, Kent State will return eight of its top 10 tacklers from a year ago and adds a pair of transfer defensive backs C.J. Holmes and tony Butler from Penn State and Nebraska.

Kent State is the favorite for a reason. Although the Flashes have not sustained back-to-back winning seasons since 1976-77, Crum is legit and his favorite target, 6-foot-3 wide receiver Isaiah McKoy, is back to haul in the targets. As the offense throws points on the board, this game comes down to the defense. If the Golden Flashes can keep the Eagles out of the end zone and force field goals in the first half, the game will go in favor of the home team.

Why Bowling Green will win:

The Falcons have not won more than four games since 2015, and 2020 doesn’t look to bring much more positivity to the table. Head coach Scot Loeffler enters his second season with certainty at running back and a talented tight end, but questions remain at quarterback and on the offensive line. Boston College quarterback Matt McDonald takes over under center and steps into a familiar scheme under his former offensive coordinator and two-time All-MAC running back Andrew Clair returns to the backfield after missing much of last year with injuries. He will split carries with Bryson Denley, who led the team with 111 touches in 2019. Tight end Quinton Morris made a team-high 55 catches last season and he returns alongside receiver Julian Ortega-Jones as the primary pass catchers this fall.

The defense will see six familiar faces of the 11 starters on defense and it can’t get much worse than last year. To win the game on Wednesday, it will have to stop a potent Toledo offense.

Why Toledo will win:

The Rockets won four of their first five games and then lost dive of their last seven to finish at .500 in 2019. Despite the record, the offense was 18th in rushing offense last season and pounded the rock down opponents throats to a tune of 224.5 yards per contest. 1,000-yard rusher Bryant Koback will return to the backfield alongside 750-yard rusher Shakif Seymour and quarterback Eli Peters. Peters completed 59 percent of his passes last season and played a strong complimentary role in the offense. He will look to top returning wide receivers Bryce Mitchell and Denzel McKinley-Lewis in an overhauled scheme under new co-offensive coordinators Robert Weiner and Mike Hallet.

Defensively, former Division III powerhouse Mount Union head coach Vince Kehres was hired in the offseason to split the defensive coordinator duties and return seven starters from a year ago. It has the base foundation to get things back on track.

It will be a tough task for Bowling Green to pull the upset on Wednesday. However, 24.5 points is a lot for the opening game of a weird year. Practice has not been traditional, the spring was nonexistent and the first games around other conferences have shown the effects. For a Toledo team under new direction, it may take some time to get the wheels rolling at full speed and shake off the early-season jitters. The theme for first games across the country has been in favor of the underdogs covering the spread, and if the Falcons can find any semblance of an offense, it may not leave the door open early or long enough for the Rockets to pull away.