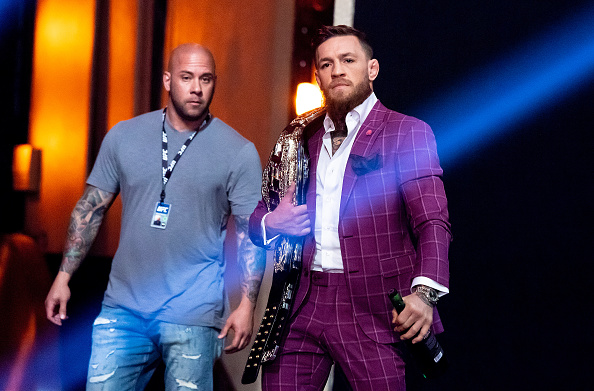 During last month’s UFC 229 press conference in New York, Conor McGregor referenced Khabib Nurmagomedov’s Manager Ali Abdelaziz being a terrorist snitch when he shouted out Ali’s son Noah during his faceoff with Khabib.

According to Russell, “Noah” is Abdelaziz’s son who he allegedly left behind when he became an FBI informant.

FYI, Noah is the son Ali abandoned in Colorado when he started as an informant for the NYPD and who he is $50k behind in child support for. @TheNotoriousMMA does his homework when preparing for war.

A source close to the family says Ali Abdelaziz recently tried to clear up his more than $50k in 11 yrs of outstanding back child support by offering to pay his son he ditched in 2006 $10k. The lowball offer came with a caveat that his mother who raised him not get a dime of it.

His manager is a fucking snitch terrorist rat. I can go into heavy detail… and I will go into heavy detail. He was pulled off of a flight going from Cairo, Egypt to New York City on September 11th, 2001. He was caught with five passports in his possession. He turned informant and turned on the people he was working with. I don’t even know how that man is in this fucking country. All these Irish people are facing immigration stuff on the way over, my own people are facing it, my family is getting stopped at the airport and then you have this man with such a crazy background Ali Abdelaziz and he’s walking around free. It begs belief to be honest. Don’t take information from an informant and that’s what he’s doing. He’s a rat bastard and I’m going to get him.

If you want to learn more about Mike Russell’s report on Abdelaziz you can listen to him talk about it here.

Listen to reporter ⁦@MIKERUSSELLMMA⁩ discuss his knowledge of Khabib’s manager Ali Abdelaziz and more before #UFC229 ⁦@TheNotoriousMMA⁩ vs #Khabib #mcgregorvskhabibhttps://t.co/hRnnEmbWLV