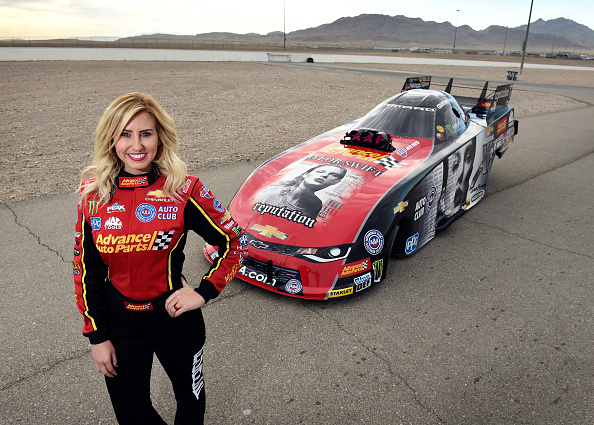 Courtney Force is the #1 driver (and the only female) in the NHRA Mello Yello Funny Car Drag Racing Series standings, as the Countdown to the Championship (their playoff system) begins this weekend with the Dodge NHRA Nationals at Maple Grove (PA) Raceway. Force is the daughter of legendary drag car racer, John Force, the winningest NHRA Champion and the founder and CEO of John Force Racing (the team Courtney races for). Courtney was in New York earlier this week and sat down with JohnWallStreet to discuss NHRA’s appeal, her appeal to sponsors and to find out what makes NHRA “the new Disney”.

JWS: For those not familiar with NHRA racing, can you explain what draws fans to drag races?

Courtney: These cars are going down the strip at over 330 miles an hour, in under four seconds; so, it’s exciting. It’s more like a sprint than the marathon that you see at most other auto races. It grabs everyone’s attention and hits all the senses. The smell of the nitro. The feeling of the cars as they vibrate the stands as they go down the race track.

JWS: Parade recently wrote an article asking if NHRA “the new Disney?”, citing the sport’s family-friendly atmosphere. Does having women compete at the highest level, against the men, contribute to sport’s family appeal?

Courtney: Definitely. We all get to compete equally, we’re not separated by a men’s league and a women’s league and that’s pretty rare. Drivers of all different ages compete in our series. I compete against men in their thirties, all the way into their sixties. There’s so much diversity in the sport and I think that’s why it really appeals to so many different types of audiences.

Courtney: Well, I hope it’s because I’m a great driver. Then on top of it, I guess a bonus is that I happen to be female. I think a lot of companies like the uniqueness of that. Advance Auto Parts (primary sponsor) is a company you would think would be male dominated, but there are females running that company; there’s females that are getting involved in racing and working on their own cars in their garage. It’s that audience we’re trying to reach.

JWS: Racing down the strip at 300 MPH requires a strong core and muscular legs, but unlike Big 4 sports race teams don’t have fitness coaches, nutritionists etc. Do you have a personal trainer? Is that a team expense or a personal expense?

Courtney: I paid for a trainer out of pocket. I did it for a little while. Now I just kind of take what I learned a few years back and do it on my own. It makes it cheaper.

JWS: NHRA racers compete for their share of a $3 million prize pool. If you include all potential off-road income streams, is it feasible for a driver to earn 7 figures?

Courtney: I think you can, over time. It depends on the different types of sponsorship deals you put together, whether you have personal services deals; I think that’s where you can kind of make your bonus bucks. Social media is starting to grow into something that’s profitable. So, I think it depends on the success the driver has had and if they’re appealing to sponsors.

Fan Marino: Drag racing is the Force family business. While Courtney currently leads John in the Funny Car series standings, her sister Brittany became the 1st woman to win a Top Fuel championship in 35 years in 2017. Older sisters Ashley Force Hood and Adria Hight are also involved in the family business; Ashley is a retired drag racer, while Adria currently serves as the CFO of John Force Racing. It doesn’t stop there. Courtney is married to IndyCar driver Graham Rahal, while Adria is married to Courtney’s teammate Robert “Top Gun” Hight.