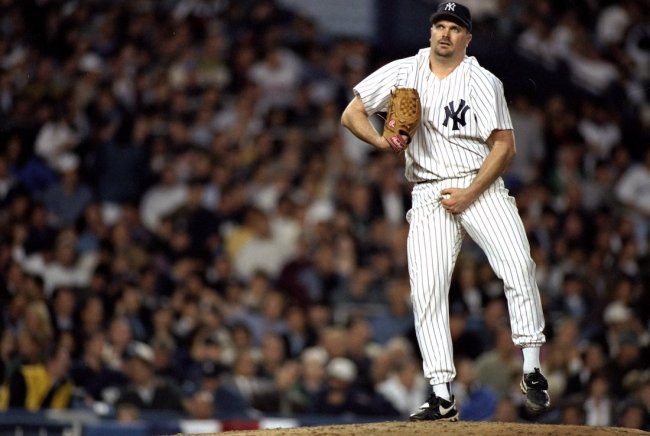 Former New York Yankees pitcher David Wells should not have been capable of doing the things he did on the mound. Like, take one look at the guy and you would’ve been convinced that the hefty, bald, mustachioed lefty was more likely to be drunk in right field starting fights than taking the bump for all those years. Yet, when all was said and done, the crafty hurler played 21 years in the majors, finishing with a 239-157 record overall. Insanity.

As a kid, I hated seeing Wells pitch against my Cleveland Indians. He was cocky. He was brash. He played by his own rules. He embodied a certain Big Apple attitude that my small town Ohio upbringing didn’t quite understand. Oh, and he pretty much dominated the Tribe anytime he faced them.

My hate aside, Wells’ career is often remembered for throwing a perfect game against the Minnesota Twins in 1998, when the former Yankees pitcher claims he was hungover and/or still drunk from partying the night prior. Pretty remarkable, if true. But despite his success in the Bronx, Wells still didn’t seem to see eye-to-eye with then manager Joe Torre or iconic team owner George Steinbrenner — and the former pitcher described how deep that hatred ran.

Talking to the New York Post’s “Pinstripe Pod”, Wells didn’t beat around the bush when describing his relationship with Torre while playing for the manager. The former pitcher even described a crazy incident that involved throwing cash in his then boss’s face, while adding that he “hated Torre. I really did.”

“I never liked Joe as a manager,” Wells said. “He did stuff to me that he shouldn’t have done to anybody. But, you know, we all knew he treated certain guys different ways. But it was alright, we didn’t care if he talked to us or not. Joe and I are friends now, I respect him. Just the playing days. You don’t want nobody telling you what you can and can’t do. That’s just how we work.”

In one particular incident, Wells purchased an authentic Babe Ruth hat and desired to wear the cap during a start against the Cleveland Indians. After Wells donned the cap during the first inning, Torre forced him to take it off, reasoning that it did not comply with uniform standards. Following the game, Torre fined Wells for the incident.

“He calls me in the office afterwards and he goes, ‘twenty-five hundred bucks,’ and I go, ‘That’s all?’ I’m like, ‘You’re shallow.’ Next day, I went and got a bunch of 1s, 5s and 10s and I threw it at him in the office. Money went flying. I was like, ‘Go buy some stuff for your car, a–hole.’ He never talked to me for the rest of the year.”

Now, considering Joe Torre ran a tight ship and embodied the Yankees tradition, the incident with David Wells had to be a real eye-opener. Since then, however, Wells and his former manager have made up and respect one another, per the former pitcher.

While throwing money in Torre’s face was one example of disrespect, Wells took things to a different level when he nearly came to blows with George Steinbrenner. Just read how the former Yankee described one awkward encounter with “The Boss”, per The Post.

In one start, Wells surrendered a home run after a fan reached over the wall and precluded Paul O’Neill from attempting to make the catch.

After the game, Wells pleaded with Steinbrenner to raise the height of the fences to prevent further interference.

“Well, that pissed me off. So I got in George’s face and I started calling him every name in the book and he’s in my face as well and he goes, ‘I’m not afraid of you.’ And I said, ‘I’ll tell you what old man. I’m gonna go put some ice on and if I come back here and you’re still here I’m gonna beat the s–t out of you. That’s how it’s gonna be.’ And he goes, ‘I’m not afraid of you.’ I said, ‘We’ll see.’

“I came out there and there was George sitting there. He looked at me, and I started ripping off that eye, and his eyes got bigger than the moon. And he ran out of there. He tore off running, I chased him. ‘Go back up in your suite, goddamnit and watch the game.’ I was all over him.”

Now that’s some serious tension, man. David Wells said that both sides made up and were fine by the next day, with Steinbrenner giving the pitcher a “big ‘ol hug and a kiss on the cheek”. But, still… what a scene.

Wells was quite the personality during his days in the majors. He did things his way — and was successful — even if they were unorthodox. And while I hated the guy as a middle schooler for being so good, hearing some of these recent stories about his time with the New York Yankees makes me sort of like him a little more now. The dude was truly one-of-a-kind.