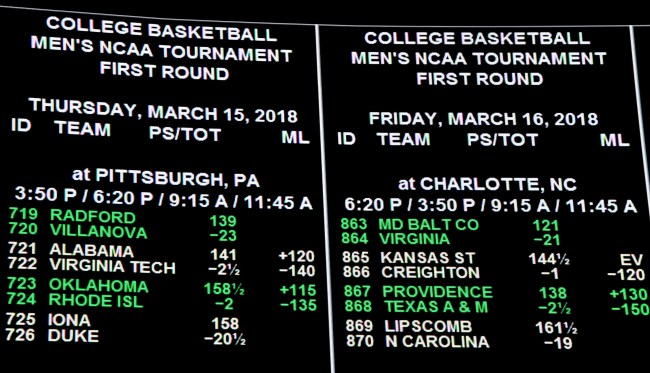 Delaware (not New Jersey) will become the first state outside Nevada to take sports bets following the May 14 SCOTUS decision to overturn PASPA. Delaware’s three land-based casinos (i.e. no mobile, online) open their sportsbooks for business at 1:30p on Tuesday, June 5. The state will enable single game betting (i.e. no in-game bets) and “championship wagering” on various sports/leagues for the first time. Delaware bettors have been able to place multi-game parlay wagers (min. three games) through the state’s lottery system on the NFL games since ’09, the state had the parlays grandfathered in when PASPA was enacted in 1992. The New Jersey state legislature is scheduled to vote on their sports betting bill later this week (June 7). Mississippi, Pennsylvania and West Virginia are also expected to begin offering sports betting before the start of football season.

Howie Long-Short: Delaware Park, Dover Downs Hotel & Casino and Harrington Raceway & Casino are the properties that will begin to take sports bets. Delaware Park and Harrington Raceway are privately owned, but Dover Downs Hotel & Casino is a subsidiary of Dover Downs Gaming & Entertainment (DDE). Back in late April, DDE reported $17.7 million in Q1 ’18 gaming profits (on $34.13 million in revenue) – but a pre-tax quarterly loss of $361,000. Why? The state’s gaming tax structure had them paying out $18.1 million “to the State and Horsemen.” The industry is lobbying for a “casino relief bill” (recently passed by Delaware State Senate) that would reduce their obligation to the state. DDE shares are up 31% (to $1.95) since SCOTUS’ May 14thdecision.

DDE isn’t the only way to invest in Delaware sports betting, Scientific Games the state’s primary sports betting contractor is also publicly traded (SGMS). The company is entitled to 15.6% of the net take with the balance split between state, casinos and horse racing industry.

Fan Marino: Bettors will be able to wager on baseball, football, basketball, hockey, golf, soccer and auto racing, but are not currently permitted to place bets on college basketball or college football games; it’s expected that will change eventually. For the State of Delaware to maximize gaming revenues, it’ll have to — college basketball and college football generate more revenue for Nevada sportsbooks than any other sport. It should be noted that games involving Delaware based teams will be off the boards at all three casinos.

The Minnesota Super Bowl LII Host Committee has released an economic impact study indicating the 10-day football extravaganza (Jan. 26-Feb. 5) generated $450 million in economic impact (i.e. net new spending) for the region, $50 million more than projected. Fans who came to Minneapolis (95% from out of state) to see the Eagles beat the Patriots, spent most their money on hotel accommodations ($81.6 million, 30%), food and beverages ($61.3 million, 23.5%), entertainment besides game tickets ($34.5 million, 13%) and retail-shopping ($28.5 million, 11%). For comparison purposes, Super Bowl LI generated $347 million in new spending for the Greater Houston area, while Super Bowl L brought in +/-$350 million to the Bay area. It must be noted that Rockport Analytics both made the pre-event economic impact projection and issued the final study referenced in this piece.

Howie Long-Short: Sports Economist Victor Matheson said it perfectly, “the Super Bowl is definitely positive, but nowhere near $450 million positive in terms of dollars in local people’s pockets.” There are several reasons why that $450 million figure is misleading. First off, it doesn’t include the $80 million lost in displaced tourism (i.e. locals who would have spent money, but left to avoid the chaos); so, the starting point for this conversation is really $370 million. “The added hotel revenues go almost exclusively to corporate profits, same with retail sales” (the retail markup and sales tax remain local) and of the $179 million spent by the league broadcast partners, operations teams and event planners — the most ever paid to put on a Super Bowl — a large portion is assumed to have gone into NFL owner pockets (i.e. never passing through Minnesota economy).

While the economic impact is certainly inflated, that’s not to say Minneapolis didn’t benefit. 83% of those who visited Minneapolis for the first time said they would be returning, meeting and convention leads are up 30% and the Legacy Fund pumped $5.5 million into the local community. For what it’s worth, Minneapolis’ CFO will present the actual incremental tax revenue generated from the Super Bowl to the city council in June.

Fan Marino: Last week, the NFL awarded Super Bowls LVII (’23) and LVIII (’24) to Glendale, AZ and New Orleans, respectively. Atlanta will host this year’s Super Bowl, with South Florida (’20), Tampa Bay (’21) and Los Angeles (’22). It’s likely that Las Vegas will be awarded the game during the next round host city selections.