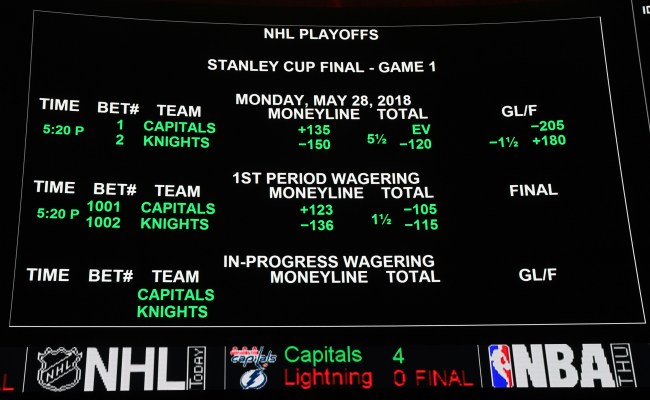 LAS VEGAS, NV - MAY 23: The betting line for Game One of the Stanley Cup Final shows the Vegas Golden Knights favored over the Washington Capitals at the Race & Sports SuperBook at the Westgate Las Vegas Resort & Casino on May 23, 2018 in Las Vegas, Nevada. The two teams will meet in Game One of the series in Las Vegas on May 28. (Photo by Ethan Miller/Getty Images)

The State of Delaware took in more than $7 million in sports bets between June 5th-24th, realizing $1,000,247 in revenue over the 20-day span. Delaware sports fans placed +/- 70,000 wagers at the state’s land-based racinos (i.e. no mobile), with the average bet worth $100. 75% of the dollars placed were on baseball games, with the World Cup (10%) and NBA Finals (8%) also drawing heavy action. The First State became the 1st state (besides Nevada) to offer single game sports wagering following SCOTUS’ May ruling to overturn PASPA.

Howie Long-Short: +/-$1 million in revenue equates to a 14% hold, far higher than the 5.5% Nevada has averaged dating back to ’92. Those results were “pleasantly surprising” to DE Lottery Director Vernon Kirk, who acknowledged that he’d “be surprised if it (the handle) stayed that strong.”

I asked Dustin Gouker, Managing Editor of Legal Sports Report why he thought the handle was so high; he said, “it’s too early to read too much into the hold. It’s a small sample size and it may simply be lots of bettors that are not terribly savvy, trying to figure out wagering.”

Fan Marino: A recent white paper from GamblingCompliance projected the U.S. legal sports betting market would be “worth between $3.1-$5.2 billion in annual revenue by 2023.” The report also predicted that 25-37 states will “have lawful wagering within 5 years”, that New York would become the largest sports betting market (generating $700 million/year in annual gross gaming revenue) and that NY would become the “first state to grant leagues a cut of betting handle and require use of their data.” While those last 2 prognostications may be true, they likely won’t come to fruition before 2019; state legislators failed to pass a bill before adjourning the session. Governor Cuomo is on record doubting that a sports betting bill would pass this year.

Facebook (FB) has been aggressive of late in its pursuit of global sports content, having recently announced deals with Golden Boy Promotions and Premier League (in Asia); the social network is also reportedly courting Cristiano Ronaldo for a reality show. The deal with Oscar De La Hoya’s boxing promotion, in collaboration with Kathy Duva’s Main Events, adds 5 live fight cards (1st is Aug. 11) to the Facebook Watch lineup. A $265 million agreement with the Premier League gives the company exclusive rights to broadcast 380 games in Thailand, Vietnam, Cambodia and Laos during the 2019-2020 season. The latest rumors focus on a 13 episode docu-series with the Portuguese futbol star; FB has reportedly offered Ronaldo $10 million+ to participate. Of course, Facebook also owns exclusive broadcast rights to 25 MLB games this season; the first non-traditional broadcaster to hold exclusive rights to a big 4 sport.

Howie Long-Short: Facebook Watch is the company’s video platform for TV-like content. The company’s increased focus on sports programming isn’t about generating ad dollars (there won’t be any ads on Golden Boy broadcasts), but about trying to boost viewership on its struggling Watch platform; Watch launched in August ’17 but has failed to gain a mainstream following.

Premier League is popular in Southeast Asia and Ronaldo is the most famous athlete on Facebook with 120 million followers, so those deals should certainly draw eyeballs. I’ll reserve judgement on the boxing deal until I see the financials, it remains a niche sport in the U.S.

Fan Marino: Facebook has been making headlines with new content acquisitions, but Watch has received less than stellar reviews from sports fans. The MLB games airing on Watch have been drawing +/- 3 million views, but there is a large contingent of fans upset they’re being forced to stream the game (as opposed to watching it on TV).

Then there are the technical issues. World Surf League was forced to come out last week and apologize to fans who experienced “a slew of streaming issues” (including not being able to watch at all) that prevented them from watching the opening rounds of the Corona Open J-Bay. Facebook is the exclusive digital provider of all WSL events for 2018 and 2019. As we’ve discussed before, if your top priority is ensuring access to the game, television remains your best option.