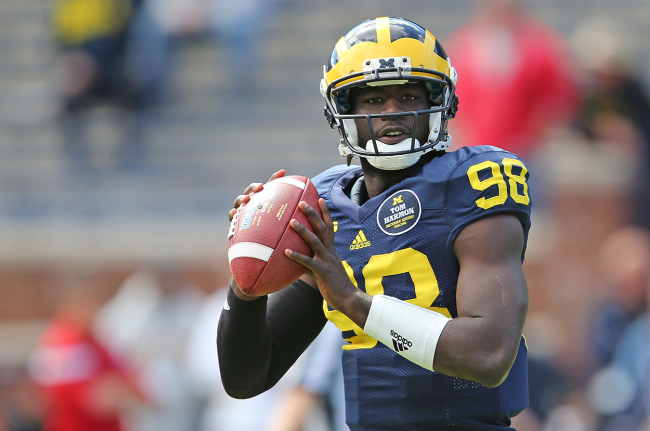 Sammi Woods is one of the top quarterbacks in the country— even though you probably don’t know her name.

Founded in 1999, the Elite 11 is the premier quarterback event in the nation. At each Elite 11 Regional that are held throughout the spring and early summer, one or two competitors (sometimes more) earn a bid to the Elite 11 Finals.

The Elite 11 finals, where the nation’s top high school quarterback is crowned, was held in Redondo Beach last week. There is also a female competition, which also took place last week in Los Angeles.

Woods was one of the standouts.

In addition to her impressive high school softball career, she is a superstar flag football player. Woods is a great defender.

Fun to get back out there and anticipate the QB….@missionfootball – the Girls are 1-0 too. pic.twitter.com/TQSHViQhgk

She is also an impressive wide receiver.

However, quarterback is where Woods’ passion lies and she’s a beast.

As a result of her impressive football career, Sammi Woods earned a chance to compete at the Elite 11.

While there, she was the benefactor of a remarkable coaching moment.

Devin Gardner, a former four-star quarterback who played five years and started two years at Michigan, is one of the coaches on the Elite 11 circuit. He is fantastic at what he does and did not shy away from getting on Nico Iamaleava during the Nashville regional for wearing Prada sunglasses.

With Woods, Gardner took a moment after a bad rep to teach a valuable lesson about missing and learning to shake it off.

“When you’re a quarterback, you get another shot,” he said to Woods. “Don’t worry about that first throw! Tom Brady misses.”

On the next rep, Woods threw a laser and dropped a dot.

Gardner knows what it’s like to reach the highest of highs as a starting quarterback in the FBS. However, he also knows what it’s like to be turned away. Gardner went undrafted, spent training camp in the NFL, played two years in Japan and finished out his career in Canada. It didn’t work out as he planned, but he didn’t worry about the first miss, shifted his focus, found a career as a coach, and is using his wisdom to teach young quarterbacks like Woods. Pretty cool.