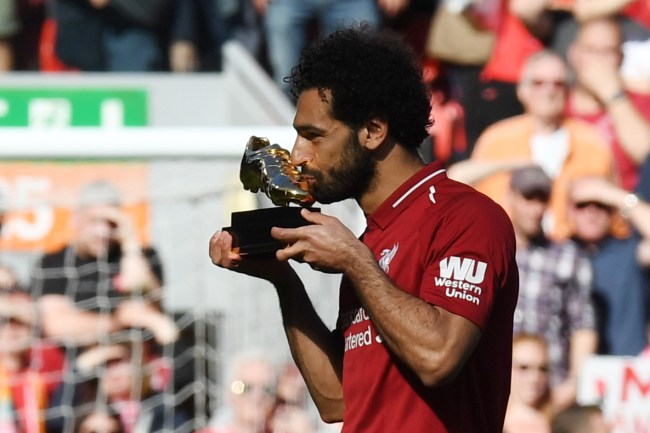 TOPSHOT - Liverpool's Egyptian midfielder Mohamed Salah celebrates after being awarded the golden boot award for most goals scored in the season after the English Premier League football match between Liverpool and Brighton and Hove Albion at Anfield in Liverpool, north west England on May 13, 2018. (Photo by Paul ELLIS / AFP) / RESTRICTED TO EDITORIAL USE. No use with unauthorized audio, video, data, fixture lists, club/league logos or 'live' services. Online in-match use limited to 75 images, no video emulation. No use in betting, games or single club/league/player publications. / (Photo credit should read PAUL ELLIS/AFP/Getty Images)

Less than four months after Sky (SKYAY) and BT Sport (BT) agreed to spend a combined $6.194 billion on the English Premier League’s five most valuable domestic broadcast rights packages, BT Sport and a “new online player” have agreed to purchase the rights to the last two available packages (F & G) at a discount rate. EPL clubs have decided to sell the rights bundles at a cut-rate price after each failed to meet their reserve prices in February’s auction and concluding that Executive Chairman Richard Scudamore overestimated the interest from non-traditional broadcasters (think: FAANG). Financial terms of the deals have not been disclosed, but the new broadcaster’s identity will be revealed at a club meeting on Thursday; speculation surrounds both Facebook and Amazon.

Howie Long-Short: Despite the decline in the value of domestic rights, Scudamore is confident overall media rights will increase “by a decent amount” during the next cycle (’19-’20 through ’21- ‘22). Any lost domestic revenue will be offset by skyrocketing international rights. NBC (in U.S. market), ESPN (Brazil) and SuperSport (Sub-Saharan Africa) have all committed to paying a significant increase for the rights to broadcast EPL games.

As we know, NBC is owned by Comcast (CMCSA), while ESPN is property of The Walt Disney Company (DIS). SuperSport is a subsidiary of the South African based internet and media group, NASPERS. The company trades on the Johannesburg Stock Exchange under the symbol NPN or OTC with the symbol NPSNY. Shares rose 71.34% in 2017 on the back of Tencent (TCEHY), as NASPERS owns 31.2% of the Chinese internet giant. NPSNY hasn’t performed as well in 2018 though; the stock is down -7% YTD, despite being +8% (to $52.38) since last Thursday’s close.

Fan Marino: Back in February, the EPL announced BT won package A ($409.3 million/season, which includes 32 games played on Saturdays at 12:30p GMT), while SKYAY took home packages B, C, D & E ($1.655 billion/season). Packages F & G each carry 20 live midweek and bank holiday matches per season. The addition of 20 more games will give BT 52 live broadcasts/season, up from 42 under the expiring agreement.

Discovery Inc. (formerly Discovery Communications, DISCA) has signed a 12-year deal with the PGA Tour for the rights to broadcast more than 140 tournaments per year – including about 40 PGA Tour events – outside the U.S. Discovery committed to spending $2 billion before the deal expires in 2030, with a portion of that capital allocated to building a “Netflix like” OTT platform that will become “the new global home of golf.” The pact encompasses both television and streaming rights, so effective 2019 international golf fans in 220 markets will also see the events air on existing DISCA-owned linear television stations. The company will sublease broadcast rights in some markets to help offset costs.

Howie Long-Short: This isn’t Discovery Inc.’s first foray into sports broadcasting, the company owns Eurosport (think: Pan-European ESPN, reaches 700 million people) and has committed $1.4 billion for the rights to broadcast the Olympics in Europe through ’24. They also hold a stake in Fubo TV (from their Scripps acquisition), a sports-centric streaming service.

DISCA is buying international sports rights because domestic sports are simply too rich for their tastes. For reference purposes, NBC has agreed to pay $7.65 billion for exclusive U.S. television and online broadcast rights through the ’32 Olympics. The PGA Tour’s existing U.S. broadcast distribution deals with NBC Sports, ABC Sports and The Golf Channel (including individual pacts for each of the 4 majors) expire in ’21.

Despite growing Q1 ’18 revenue +43% YoY (reported basis) to $2.31 billion (including international networks +28%), DISCA reported a Q1 ’18 loss. Net income dropped to an $8 million loss — after generating a $215 million profit in Q1 ’17 — due to “lower operating results, higher restructuring charges, other transaction costs associated with the acquisition of Scripps and a higher interest expense.” Company shares are down 10% (to $21.09) since the company reported on May 7.

Fan Marino: Discovery CEO David Zaslav isn’t worried about the price tag, calling the PGA Tour “the most compelling international sports IP in the world.” That’s not the case if you’re measuring by popularity (it’s closer to 10th) and it’s certainly not true when you consider that the deal excludes both the Masters and U.S. Open (next weekend at Shinnecock Hills), the Tour’s 2 most watched events (PGA Championship comes in 3rd).

Zaslav believes this deal works out in the end because “local matters” (i.e. fans root for their countrymen) and that the PGA tour is a particularly diverse organization. Did you know that 25 of the Top 50 golfers are from outside the U.S. and the Tour’s 85 players hail from 25 different countries?