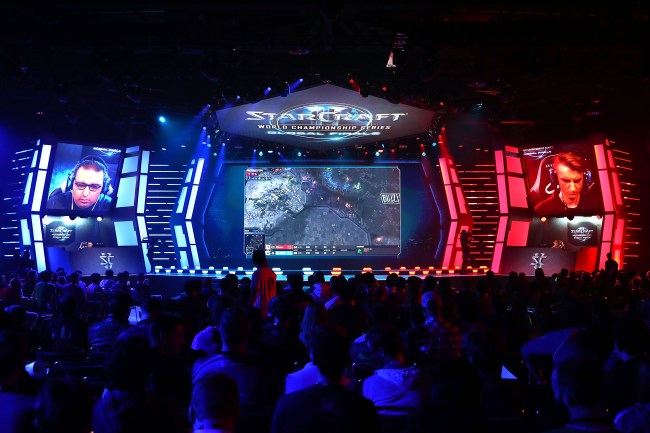 ANAHEIM, CA - NOVEMBER 3: SpeCial competes with Elazer during the StarCraft World Championship at BlizzCon 2017 at Anaheim Convention Center on November 3, 2017 in Anaheim, California. BlizzCon is the site of the Overwatch World Cup 2017 eSports tournament. (Photo by Joe Scarnici/Getty Images)

Goldman Sachs published a note projecting eSports viewership would outdraw Major League Baseball and the National Hockey League in 2018 and grow to 276 million viewers by 2022, which is roughly the size of the NFL’s audience. The note cited increasing prize pools, the ubiquity of live streaming and improved infrastructure for pro leagues as reasons why the global esports audience would grow 14% YoY for the next 5 years. Goldman analysts added that “total esports monetization will reach $3 billion by 2022.”

Howie Long-Short: It’s hard to argue with any of the points Goldman made. The $100 million Fortnite prize pool recently announced rivals “nearly the size of the entire esports prize pool in 2017”, Epic Games and Activision Blizzard (ATVI) have both built out infrastructure for competition (see: North America and EU League of Legends leagues, Overwatch League) and ATVI has a $90 million streaming deal in place with Twitch. There’s also plenty of room for growth, as NewZoo data indicates that just 5% of the 2.2 billion gamers worldwide currently watch eSports.

While we focus on public equities at JWS, there’s plenty of private money being pumped into eSports too. In fact, the $1.4 invested YTD represents a 90% increase over all of 2017.

Fan Marino: Steelers WR JuJu Smith-Schuster has signed a 6-figure endorsement deal with HyperX, becoming just the 2nd NFL player with a gaming based endorsement (Nyheim Hines, Colts was 1st). You may recall, back in March we noted that Smith-Schuster joined Drake, Ninja and Travis Scott in Fortnite competition. The group set an all-time, non-tournament, record for concurrent viewers on a single individual’s (Ninja) Twitch channel (628,000, previous record 388,000). As part of the deal, Smith-Schuster will wear HyperX headsets during live streaming sessions, participate in marketing campaigns and appear at fan events.

Roger Federer has left Nike (after 21 years) for Uniqlo, signing a 10-year endorsement deal worth more than $300 million with the casual wear company. Federer immediately becomes the biggest star sponsored by the brand, joining Japanese tennis player Kei Nishkori and Australian golfer Adam Scott. The 20x grand slam champion, who appeared for his Wimbledon opener (as the men’s top seed) dressed in Uniqlo gear, will continue to wear Nike sneakers as Uniqlo does not have a footwear line. Uniqlo is expected to acquire the rights to the RF logo (owned by Nike) synonymous with the tennis champion.

Howie Long-Short: Uniqlo is a subsidiary of the Japanese retail holding company Fast Retailing (OTC: FRCOY), as are J Brand and Theory. Uniqlo generated $14 billion in 2017 sales, 75% of all FRCOY revenue; CEO Tadashi Yanai intends on growing that figure to $20 billion by 2020, including $10 billion in U.S. sales. Shares of the fast-fashion brand declined 2% on Monday’s news, closing at $44.85.

Nike (NKE) reported fiscal Q4 earnings on Friday. News of sales growth in North America (+3%) following 3 straight declining quarters, increased revenue growth guidance for fiscal ‘19 and a $15 billion share buyback plan sent shares rising +11.1% to an all-time high ($81.00). The good times didn’t last through Monday though, NKE was among the Dow’s biggest losers on the day, down -1.67% (closing $78.32); a decline unrelated to the Federer news.

Nike isn’t the only company using cash to buy back their own shares. Corporate buybacks are occurring at rates never before seen in market history; 31 companies announced buybacks of more than $1 billion in June alone. In total, companies announced record share repurchases totaling $433.6 billion during Q2, up from $242.1 billion in Q1 (previous record). Corporate cash isn’t just being used on buybacks though, companies paid out a record $111.6 billion in dividends during the most recent quarter and the dollar volume ($726.3 billion) more than doubling YoY (quarter ending May 31st) on M&A activity.

Fan Marino: Federer is going to be 37 next month, so Uniqlo is going to be paying him to be a “Global Brand Ambassador” long after he retires. While I can’t justify the figure (Nike was paying him $10 million/year), the decision makes slightly more sense if you understand that unlike Nike, Adidas, Under Armour and now Puma, Uniqlo is a fast-fashion brand that produces performance athletic apparel; as opposed to a sports apparel brand. For comparison purposes, Kevin Durant also has a 10-year $300 million endorsement deal (Nike). LeBron James has a lifetime contract with Nike said to be worth up to $1 billion.