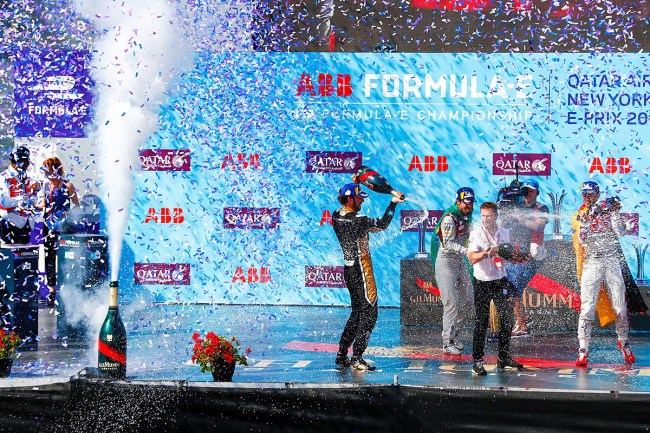 ABB FIA Formula E, the only fully electric championship in the world, wrapped up its 2017-2018 season (10 cities/12 races) in Brooklyn (the circuit races in city centers) on Sunday with Drivers’ Championship winner Jean-Eric Vergne winning the final race of the season; Audi finished as the Teams’ Champion in its first season on the circuit, finishing just 2 points ahead of Techeetah. JohnWallStreet had the chance to connect with FE CEO Alejandro Agag on Friday to talk about why manufacturers are drawn to the sport, the circuit’s distribution strategy and where FE’s growth is coming from.

Alejandro: The electric technology, especially in mobility, is still at the beginning of the curve. So, the developments you make are actually very relevant and can immediately be transferred to the road cars. Combustion cars have been around for a long while, all of the developments that can be done have been done already; they’re fully developed or practically fully developed. That’s why a lot of manufacturers joined so late (i.e. after witnessing developments within first few seasons). They see a platform where they can develop technologies that they can use on the road cars.

Editor’s Note: Nissan is on board for the 2018-2019 season. Porshe and Mercedes will follow the following year. Formula E has more manufacturers than IndyCar and F1 combined.

JWS: Rights holders across the sports world have been introducing direct-to-consumer OTT platforms, but Formula E doesn’t have one. Can you explain your distribution strategy?

Alejandro: We don’t have an OTT offering at the moment because we’re trying to maximize reach in terms of free-to-air distribution. In the U.S., we’re on Fox Sports 1 &2. In Latin America, we’re on Fox. In Europe, we’re on Eurosport and on the main free to air channels in Italy, France, Germany and the U.K. We’re on Fuji TV in Japan and CCTV in China.

JWS: Formula E just completed its 4th season. Where is the audience growth coming from?

Alejandro: The growth in viewership is mainly driven by European markets, by China and South America, so those are the places we’re investing most heavily in marketing the series. On the digital side, we’re seeing particularly strong growth from the younger segments of the demographic.

Howie Long-Short: The circuit’s title sponsor is ABB, the world’s largest builder of electricity grids; power and automation are the company’s core businesses. The company is publicly traded on the NYSE under the symbol ABB. Back in April, ABB reported it had beat net profit ($572 million), sales ($8.63 billion) and order intake ($9.77 billion) estimates for the first 3 months of ’18. Though ’18 represents the first year that “all ABB markets are either steady or growing”, share prices continue to decline. ABB shares are down -8% (to $21.63) since the company reported Q1 earnings and they’re down 24.5% since hitting a 52-week high in late Jan. ABB is scheduled to present Q2 earnings on Thursday (July 19th).

Fan Marino:  NYC is the sole U.S. stop on the Formula E circuit. Why aren’t there more races domestically?

Alejandro: We have very little traction with sponsors in the U.S. The U.S. has NASCAR and IndyCar, so they (U.S. corporations) don’t pay much attention to international series’. We go everywhere else in the world; China, South America, Europe, and get many millions of dollars for sponsorships. We have very large sponsors, global sponsors that are in the championship, but we don’t have many local sponsorships.

Fun Fact: Did you know that Formula E is adding a power strip for the 2018-2019 season? Drivers who pick it up will see a temporary boost in their car’s power (think: Mario Kart). There’s been no indication that the sport is looking to banana peels anytime soon.

Fiat Chysler (FCAU) union workers in Melfi, Italy have gone on strike protesting the +/- $117 million transfer fee (largest in Serie A history) paid to bring Cristiano Ronald to Juventus. The Italian trade union released a statement saying, “it’s unacceptable that, while for years you have continued to ask FCA (Fiat Chrysler Automobiles) and CNHI (Case and New Holland Industrial) workers to make enormous sacrifices on an economic level, the company spends hundreds of millions of euros on the purchase of a footballer.” The statement went on to suggest “the company should invest in car models which guarantee the future of thousands of people rather than make just one person rich.” The strike, which began on the evening of July 15th will run through the morning of July 17th.

Howie Long-Short: The Agnelli family, which owns a controlling interest (63.77%) in Juventus, also has a 29.1% stake in Fiat (owns Ferrari); making the union workers and Ronaldo “employees of the owner.” Fiat workers (those lucky enough not to be on “state sponsored layoff schemes”) haven’t seen raises in a decade as the company has continually told employees “that times are tough and that we must resort to social safety nets in anticipation of the launch of new models which never arrive”, so their anger is understandable. Unfortunately (for leverage purposes), the strike is likely to have little impact on corporate profits; the factory is just 1 of 7 Fiat controls in the country and the union reportedly doesn’t have many workers there. Fiat is claiming that a recent investment in the company will enable all workers to return to work by 2022.

Fiat and Juventus are independent companies and each manages their own finances, so it’s not as if Juventus pulled capital from Fiat’s investment fund (as the statement alluded). In the event the 2 companies did commingle funds, one must think Ronaldo’s arrival would have a positive long-term impact on company finances; JVTSF revenues/profits are “strongly influenced by the performance of sports results and in particular the UEFA Champions League”. A Ronaldo led Juventus team would certainly be expected to qualify for the UEFA Champions League annually.

Fan Marino: As mentioned last week, it’s possible (if not likely) Ronaldo will appear against his former squad on U.S. soil. Real Madrid is scheduled to play Juventus in the International Champions Cup in Washington, D.C. on August 4th.

There should be a few other opportunities to see Ronaldo in the U.S. this summer. Juventus will make appearances in both Philadelphia (July 25, vs. FC Bayern) and Harrison, NJ (July 28, vs. Benfica); and will take on the MLS all-stars in New Orleans on August 1.