Report: Freddie Freeman’s Agent Never Told Him Atlanta’s Final Offer Because He Knew He’d Go Back To The Braves 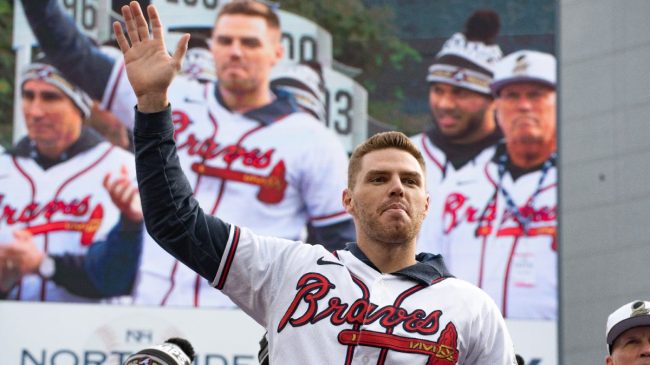 Freddie Freeman made the move from the East Coast to the West this offseason when he spurned the Braves to team up with the Dodgers. Freeman’s addition to the order gave Los Angeles one of the most potent lineups in baseball.

And with Freeman at first base, the Dodgers are off to a 45-28 start, and they’ve got a stranglehold on the NL West division. They’ll certainly be a playoff contender and should be in the World Series mix come October.

But would the superstar slugger still be in Atlanta if he could?

Freddie Freeman played his entire career with the Braves before making the trip to LA. While there, he was a perennial All-Star, an MVP, and a Gold Glover. Over 12 seasons, he hit .295 with nearly 300 home runs. Freeman helped the Braves clinch their first championship since the mid-90s with an incredible postseason run in 2021.

The first baseman made a return to Atlanta with the Dodgers taking on the Braves this past weekend.

The return obviously sparked some emotion, as the Braves faithful welcomed him back with open arms. Then, the unthinkable happened.

Freeman fired his agent, creating a controversy. Did he really want to be in LA or was he happier in Atlanta?

According to a recent report from sports radio host Doug Gottlieb, Freddie Freeman’s agent, Casey Close, never told the first baseman about the Braves’ final offer. That was what led to his being fired.

Atlanta and Los Angeles had gone back and forth to land Freeman, with the Dodgers winning out due to their terms. But Freeman never got to hear the Braves’ final plea.

And according to Gottlieb, Close hid that information because he didn’t want Freeman to return to Atlanta.

Casey Close never told Freddie Freeman about the Braves final offer, that is why Freeman fired him. He found out in Atlanta this weekend. It isn’t that rare to have happen in MLB, but it happened – Close knew Freddie would have taken the ATL deal

A crazy story. The motivation behind that deception isn’t yet known, and we won’t speculate, but it’s got to be the biggest storyline in baseball this year.