Take A Look Inside The Baller Mansion Gregg Popovich Is Selling In San Antonio For $3.1M 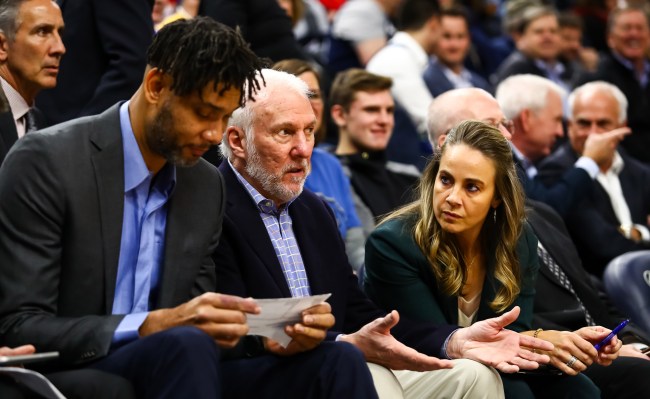 San Antonio Spurs head coach Gregg Popovich has been a winner for pretty much his entire NBA coaching career. His only losing season in his 24 seasons coaching the Spurs was in his very first one when the team went 17-47. Of course, they followed that record up by going 56-26 and 23 years later they still haven’t finished below .500.

That being said, Pop has been taking a massive L when it comes to selling his giant 9,640 square foot mansion in San Antonio.

Considering everything that comes with this house, $3.1 mill seems like a relative steal.

The house, built in 1999, which sits on 2.62 plush acres located in one of “San Antonio’s most exclusive estates,” was purchased by Popovich in 2005.

The coach of the San Antonio Spurs, Gregg Popovich, has drawn up a new strategy for selling his Texas home. The home was built in 1999, and the listing details call it one of “San Antonio's most exclusive estates." https://t.co/knK7x0LEB1

Check out this description of the home…

Perfectly designed for a lifestyle that embraces both intimate moments and grand-scale entertaining.

Enter through the secondary gate for Vineyard Estates within the guard gated Dominion exemplifying privacy and secluded with spectacular panoramic vistas. Step inside this exquisite custom built Don Craighead estate and be greeted by walls of floor to ceiling windows allowing for natural lighting to flood the interior, affording ample opportunity to relish in the gem’s extraordinary appointments.

From the fully equipped chef’s kitchen to the family room with soaring ceilings every aspect of this home is bold in design.

The master suite is complete with a spa like bath separate vanities, large His and Hers closets. Guest bedrooms are spacious and luxe all with en-suite bathrooms.

Exuding extraordinary charm, the possibilities are endless with this rare opportunity to own one of San Antonio’s most exclusive estates.

Of course this room is in Gregg Popovich's house (that he's now selling). pic.twitter.com/XJKhoErIpi

Sweet, huh? Take a couple of visual tours of the place before you make your final decision.