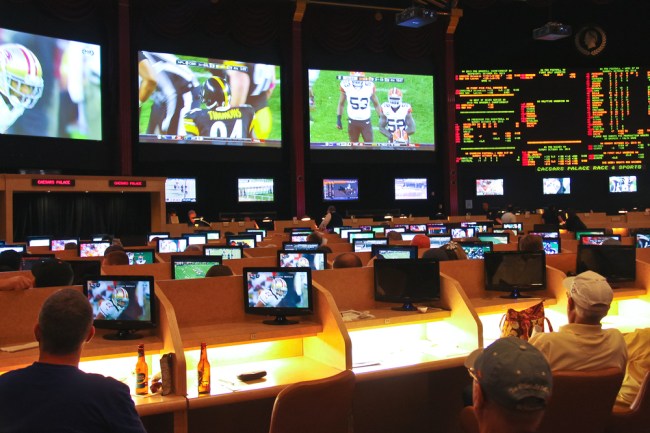 A 39-year-old entrepreneur from Portland, Oregon just took home $1.3 million ($950,000 after taxes) in a season-long handicapping tournament against the best professional gamblers in the world. The tournament requires a $1,500 entry fee and each gambler picks 5 teams during each of the 17 weeks of the NFL season.

Briceton Branch Sr. told his son he wanted to enter the tournament while picking him up from H.S. football practice and his son was all about it. Somehow, someway, the 39-year-old dad always seemed to make the right picks. But could he beat the professional sharks in Las Vegas and take home the most coveted prize in sports handicapping? You’re damn right he could.

In his first time in the contest, Branch beat more than 2,700 handicappers — the largest field ever — and won $1.3 million (about $950,000 after taxes). Each entry costs $1,500, and participants make five NFL picks against the spread each week.
The SuperContest has exploded in popularity over the past decade, producing a variety of winners. Last year, a Starbucks barista won. In 2013, a financial trader with expertise in math and statistics took home the title. This year, it went to Branch, a 39-year-old entrepreneur from Portland, Oregon, who started getting interested in sports betting in 2012. (via)

With his $1.3 million in winnings he plans on purchasing his childhood home in Portland, Oregon which is a pretty dope move given how competitive the Portland real estate market is.

So, how’d he do it? That’s the question every sports gambling degenerate like myself wants to know. We all dream of making millions in sports gambling instead of giving away a few hundred each year to shitty bets. This man appears to have the secret sauce. A method that was able to best the top handicappers in Vegas. Here’s what he told ESPN:

He did it, he says, with a mix of gut feel and sleep therapy — or at least that’s all he’d reveal.
“I can’t give up my recipe because the oddsmakers will read about it, and then that will give them some light to try to counter on me, because it’s a silent game of chess,” Branch told ESPN in a Tuesday phone interview. “But I can just tell you, when I do run my process and pick my teams, I do feel my gut out and I do sleep on them. I can tell you that much. But as far as what I’m looking for, this and that, I can’t speak on that. That’s like a million-dollar question.” (via)

He’s not telling because his strategy appears to be defined enough to the point that sharks could then work against him and potentially capitalize on every mistake. I’m an average sports bettor at best but just reading through this story makes me want to get three friends together to each put in $500 and enter this tourney next year and compete against the best even though I know I’d just be throwing money away.

To read about which picks he made that took him all the way to the championship and $1.3 million you can CLICK HERE to read the article on ESPN.